But he is a man of great focus. And every weekday for the past seven years, he’s completed the seemingly impossible task of writing for some of Brafton’s most highly technical clients.

So in a sense, yeah – he slays with any writing utensil you hand him. 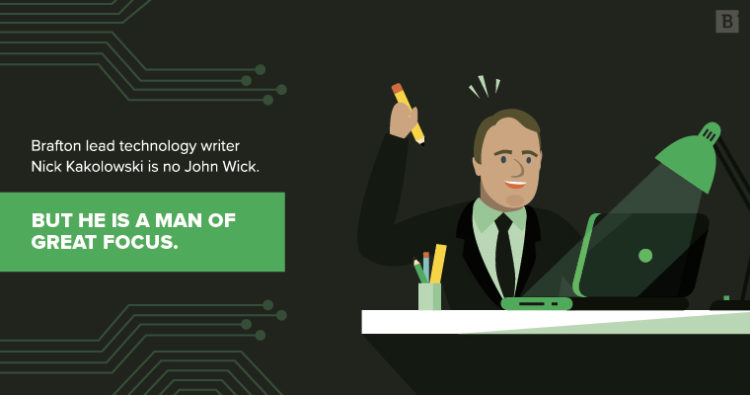 Originally from the Philadelphia metro area, Nick took up the pen for Brafton’s Boston office back in 2010.

He’d previously freelanced here and there, and before that he taught high-school English and Latin.

Despite being green to the world of SEO and content marketing in general, his love for language, communication and learning made him a natural fit for Brafton, and his affinity for technology sealed his fate as a tech writer.

Nick also appreciates that technology’s only constant is change. It keeps him from feeling stagnant as a writer.

“I love learning new things, and it’s an exciting sector to learn in because there’s always something new happening.”

From day one, this willingness to run alongside an ever-evolving industry made him a formidable addition to the tech desk. He immediately impressed clients and coworkers alike by consistently threading the needle for some of the most complex subject matters we’ve seen to date.

‘Writing kind of found me’

Nearly every writer at Brafton has some sort of origin story – that defining memory or formative moment when they just knew they’d someday pay the bills with words.

For Nick, it all started with an appreciation for history.

“I realized I wanted to get into literature in high school.” Nick says. “Because I loved the stories of history as opposed to the details, which is essentially what literature is. When we just know the facts we don’t really get there. But the stories that connect us to human emotions inspire me.”

And it makes sense. When he’s not crafting killer content, you’ll find Nick buried in the works of Alexandre Dumas, the poetry of Seamus Heaney and Billy Collins, or his new genre du jour, travelers’ memoirs.

Nick is also a self-proclaimed gamer, and unsurprisingly, he prefers narrative-driven role players.

His favorite game of all time? Final Fantasy VIII – and not for the graphics or the gameplay, but because he could relate to the main character at that time in his life.

For the most part, Nick’s days at Brafton have been par for the content marketer’s course: The early start, the inordinate amount of pacing during ideation, the occasional conference call, some emails, some copyediting and the writing – so much writing.

That last part is arguably what he does best. Nick has mastered the art of blocking off his schedule for a few hours every day to tune out and focus on writing, and writing only.

For Nick, it all started with an appreciation for history.

But if you asked him, he would tell you that the content he creates is not his greatest source of professional pride; rather, it’s the client relationships that grow out of this day-in, day-out exercise that he finds most meaningful.

“I very much take pride in my relationships,” Nick says. “I value the opportunity to help clients achieve their goals, to share in their vision for their brand and create content that’s really going to support and drive what they’re trying to achieve. It’s really how that relationship gets built and how it grows that’s the most fulfilling part of the job for me.”

And that’s what he’s done for 7 years

“That can feel like a lifetime in this industry,” Nick says.

Be that as it may, he’s glided through the time crunches, the deadlines, the last-minute edits and the complexities of new and unfamiliar subject matter like water around rock.

And that’s only the half of what Nick brings to Brafton.

“What really makes a story resonate is the people in it.”

One could say the same about a business, don’t you think?