The story of Brafton and Alissa Herman almost never was. But thanks to a couple fortuitous turns of fate and one browser tab that refused to close, the two were paired up — and truthfully, Brafton is infinitely better off thanks to it.

What is and what may never have been

OK, let’s actually back it up a few ticks. The year was 2016, and Alissa Herman, after earning a bachelor’s in sociolinguistics, was working in mostly administrative roles. However, a restless desire to create continually tugged at her.

“After work, I would go home and illustrate because I felt like there was this creative energy I had that wasn’t being satisfied,” Alissa says. 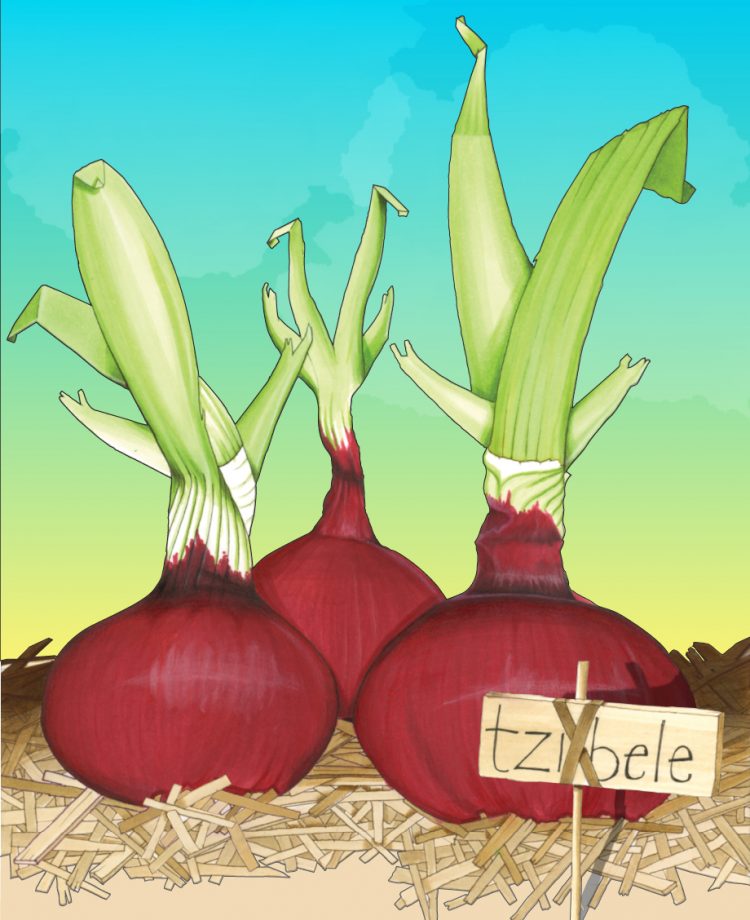 Alissa created this as a gift for her grandmother based on a Yiddish insult her grandmother says: “May you grow like an onion with your head in the ground.” And look – upside-down, the onions have arms and legs!

So she pivoted to pursue design and illustration professionally, entering a one-year program at Tufts’ School of the Museum of Fine Arts.

“It really was just a matter of I decided I wanted to do it — and I did it,” she says.

That determination and self-starter capacity are evident throughout Herman’s story. After earning a certificate, she got her start illustrating event posters for the Harvard Humanist Hub. One of Herman’s favorite projects was a poster for a talk by Sasha Sagan, daughter of the late, famed astronomer Carl.

She completed a portrait of the two with a quote from “Contact,” a novel by the elder Sagan and Alissa’s favorite childhood book, as well as a separate poster for the renowned biologist EO Wilson. An internship at a startup further allowed Alissa to cut her teeth in professional design.

Which brings us to that fateful moment in time when a Brafton job posting caught Alissa’s attention. The role was advertised as “design/illustrator,” and because illustration was her forte and what she wanted to do primarily, Alissa was intrigued. Yet she was also somewhat hesitant to apply because there were criteria she didn’t meet.

The tab with the job posting sat open for hours as she searched elsewhere. However, something about it just felt different.

“I almost didn’t apply,” she recounts. “But weirdly, I kinda knew the job was mine. Now I tell everybody, ‘if you’re job-searching, don’t ever think the requirements are the final say. If you think you’d be good, just apply.'”

In this case, Brafton undoubtedly benefited from broadening the criteria a bit, and netting a talent like Alissa.

From internal screams to teamwide cheers

Life at Brafton started out fast for Alissa, and though it hasn’t slowed down all that much in the year and a half since, she’s found her groove. But that doesn’t mean there weren’t some bumps in the road initially, like a nasty case of imposter syndrome.

“I was actually pretty convinced they hired me by accident,” Alissa laughs. “When Ken Boostrom did a Workplace post announcing my hire, I half expected someone else’s description and thought I’d either have to assume their identity or come clean. Once I knew it wasn’t a mistake, l calmed down a little.”

The pace of work can be hectic, with an ever-replenishing design queue, but Alissa credits two key resources as helping her manage the flow: her fellow design team and a library card.

“My coworkers are intrinsically motivated and push themselves and me to be constantly learning, growing and improving,” she says. “If I have an assignment and need to think up the best approach, I might look up what coworkers have done for similar clients or projects and try to emulate what was successful about what they did. If I need help, they’re always there.” 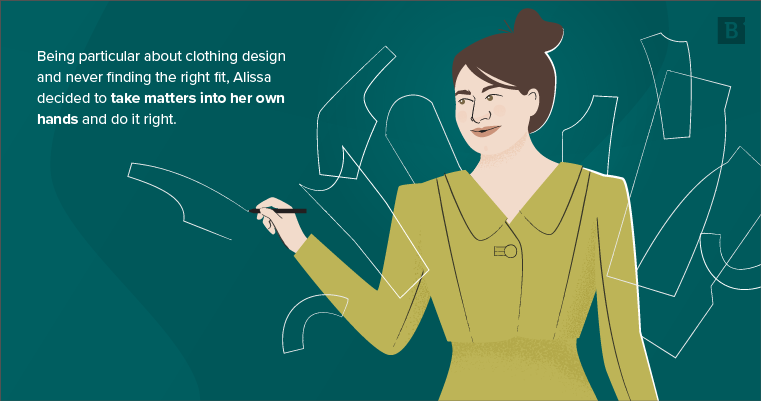 Shaving those seconds off can add up, and if ever Alissa needs a reminder on what goes where, she can check the color-coded post-notes adorning her desktop. Each Adobe application has its own color note according to its icon color, like blue for Photoshop.

The self-learning and drive to create and achieve has led Alissa to collect numerous wins at Brafton. From favorite projects like an infographic breaking down the anatomy of a turntable to taking the lead on isometric design training, each success inspires her to do more.

But if we’re talking inspirations in Alissa’s life, perhaps none stands taller than “The Marvelous Mrs. Maisel.” The show and titular character have energized Alissa to embark on an ambitious project of her own: replacing her wardrobe with garments she made entirely herself.

Being particular about clothing design and never finding the right fit, Alissa decided to take matters into her own hands and do it right.

“Garment-making satisfies the artistic and analytical sides of me,” she says.

As a lover of vintage styles, Alissa saw no better benchmark for herself than the period-appropriate costuming of The Marvelous Mrs. Maisel, a comedy-drama set in the late ’50s.

“The clothing is gorgeous,” she raves. “Basically, I found a bunch of promotional photos from the show, went through the scenes and made a huge Pinterest board. I’ll look at that and from there sketch something I like.” 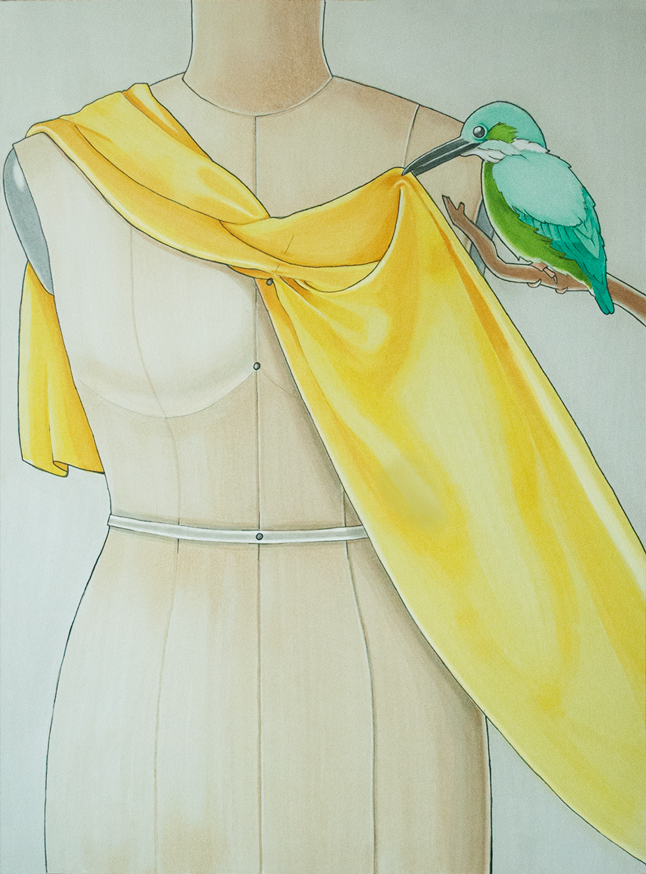 Creating all of her garments from scratch means Alissa needs to be proficient in different techniques, like tailoring, which is an additional skill within garment construction and entails more intricate fabric manipulation. Enter the public library and that self-starter mentality again.

“I rented all the books in the Boston Public Library and MinuteMan libraries I could,” she says. “I also got subscriptions to websites with pattern drafting and sewing coursework and went on YouTube to watch tutorials. In 2019 you can learn anything you want on the internet and/or at the library. All the diff techniques have been rewarding and I’m very happy with it.”

The star success of her wardrobe revamp, by her own estimations, is an empire waist pencil skirt that Alissa drafted based on a Marvelous Mrs. Maisel piece. Dark olive green, the skirt was constructed with a vintage zipper and interfacing techniques that would have been true to the time. Alissa even used similar supplies for garment construction, and is in the middle of completing a jumpsuit, with “tons” of plans for coats, pants, dresses and more.

In between her design and illustration work at Brafton and her own personal ambitions, Alissa has become a master of any craft she picks up. So if you want to succeed like her, just be sure to take her advice and visit your local library — frequently!

From improv and triathlons to content writing and project management, Carly Gillum’s determination and dedication have been a winning combination.

Finding inspiration in management and music with Gray Bouchard

With an eclectic professional background and a musical career on the side, Associate Director of Project Management Gray Bouchard has plenty to teach about what makes marketing content meaningful.

Create my strategy and get pricing:
X