Life’s funny, and so is Brafton Project Manager Carly Gillum.

That would be more than enough for one person to handle, but on top of everything else, Carly runs triathlons and is currently training for her next competition. Who could handle all of that, while still devoting time to the daily demands of content marketing? Just one of the best project managers at Brafton.

But let’s back it up a little and start from the beginning.

The road to Brafton

Carly grew up in Southern Illinois just across the river from St. Louis. From an early age, she enjoyed writing and always kept a journal or diary. In high school, she helped run both the school newspaper and yearbook. That passion took her north to Chicago, where she studied journalism at DePaul University.

After graduating, she finally found the opportunity to get involved in the local improv scene and started taking classes at Second City. She had been interested in sketch comedy for a long time, but had always felt that she needed to focus on her education. 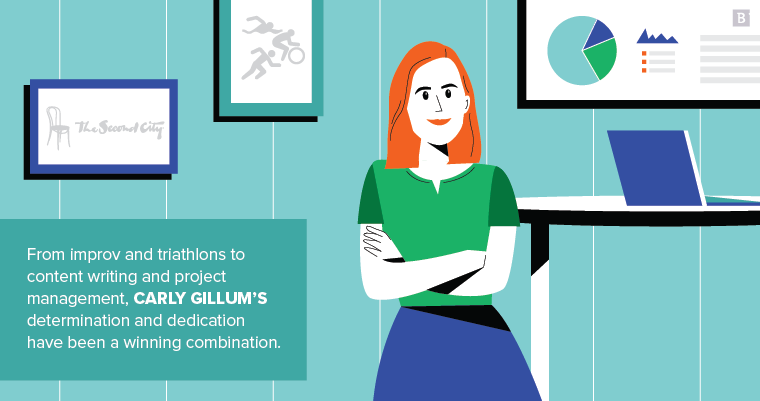 Entering the world of improv proved to be a pretty good career move for Carly. One of her classmates at Second City happened to be a writer at Brafton and was more than willing to give her a glowing reference. And so, on that fateful day in May 2015, Carly joined Brafton as a writer.

Turning heads as a hotshot writer and project manager

Carly quickly made a name for herself as a great writer who could quickly dive into a wide variety of topics and create high-quality content. She soon moved over to the business writing team where she was able to thrive despite not having any previous experience covering industries like, say, financial services.

“Writing for so many different accounts, it really broadens your understanding about different industries,” Carly says. “I liked that variety. I learned a lot and it was a great experience.”

Carly soon moved up to Senior Writer, taking on even more demanding clients and getting more involved in the day-to-day work of managing accounts and coordinating with different internal teams.

“Project management forces you to flex a different muscle than working in production. At the same time, you get to take the skills you’ve developed and apply them in a different context.”

That experience would serve her well on the next step in her Brafton journey. When an opening for a position with the Project Management team opened up in 2017, Carly jumped on it.

She felt like she was a good fit for the role, but more than that, Carly saw a transition to project management as an opportunity to grow professionally and to build upon her already impressive skill sets.

“Project management forces you to flex a different muscle than working in production,” she says. “At the same time, you get to take the skills you’ve developed and apply them in a different context.”

The show must go on

Although there are undeniably challenges to project management (“things don’t always go according to plan, but it’s our job to roll with it and make sure everyone’s happy in the end”), Carly really values that experience she’s had in the role.

“It’s a nice feeling seeing these huge projects evolve from start to finish,” Carly notes. “And when you can carry something through and really hit the nail on the head for a client, that’s amazing.”

Carly also enjoys having ownership on an account and being able to take a more direct role with both clients and internal teams.

“It’s a nice feeling seeing these huge projects evolve from start to finish. And when you can carry something through and really hit the nail on the head for a client, that’s amazing.”

From her time as a writer on different editorial teams to her role today as a project manager, Carly has always valued Brafton’s tight-knit community and sense of camaraderie.

Of course, with such an active life outside of work, she really appreciates how supportive Brafton is of her other passions. Carly knows Brafton always has her back, whether she needs to work from home so she has more time to work on writing a new sketch or is feeling gassed the morning after an especially intense training session.

We Braftonians can consider ourselves lucky to have someone so multi-talented in our ranks. Maybe someday we’ll see Carly on Saturday Night Live or some kind of MadTV revival, but until then, we’re glad to have her here at Brafton.