The beautiful thing about content marketing is that all departments come together to work on a client strategy.

This is one of the things Project Manager Chris Helms likes most about his current role. He describes himself as a “natural connector,” and collaborating with people across all departments to deliver on a strategy is very satisfying to him.

Chris has had quite an interesting career path – not only at Brafton, but in his earlier jobs as well. He obtained a history degree from the University of North Carolina at Chapel Hill, and while he only took one journalism class in his college days, over the years he became a writing and editing guru.

He was brought on at Brafton in August 2015 as a Lead Editor for the Finance editorial desk. He quickly moved up to a Senior Editor position before making the move to his current position as a Project Manager.

He was drawn to the position because it allows him to get his hands dirty when it comes to working with clients.

“The Project Manager role gives me the chance to step out from behind the AP Stylebook and connect with customers,” he said. “I’m loving it.”

And while he has moved on from the editorial side of things to a more involved approach across all content types, he says his keen eye for good content has helped him as a Project Manager.

“Some smart strategies have no blog post component, for instance,” he said. “But nothing – not a video, not an animated graphic, not a social media campaign – works unless grounded in good writing.”

He also sees a lot of “best practices” that clients aim to utilize with their content, and in his opinion, not all are effective. For example, he’d like to see more companies using the Content Mapping approach the way that Brafton does, because “No deliverable exists in a vacuum.” Content Mapping allows our writers to focus on keywords, structure and topics to deliver a more detailed piece of content that interests and engages readers. 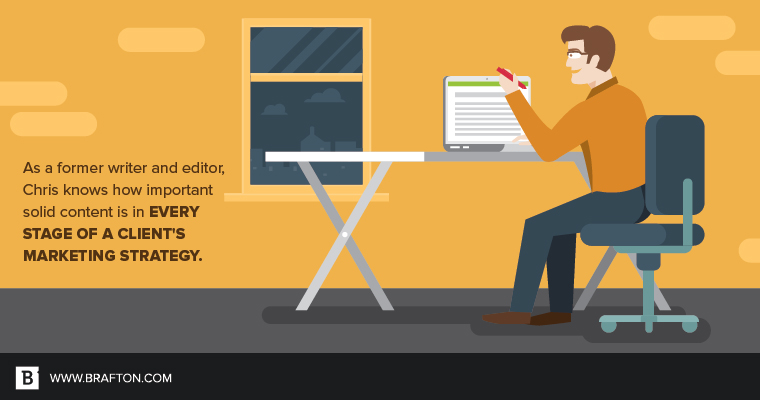 But what about a wide-spread best practice that should fade out? Chris believes brands should be more careful with keyword usage.

“Keywords still have importance, but they have to connect with a clear search intent to make a difference,” he said.

Chris has showcased his wide range of skills at Brafton in multiple roles, and we’re excited to see where he’ll help the company go next.

But if the content marketing gig doesn’t work out, he’s got one skill to fall back on.
“At karaoke, I do a mean spot-on Morrissey impression,” he said.

Project Manager Kane Trezona bridges the gap between Boston and Brafton’s Aussie clients; here’s what he says is the most important skill for project management.

Finding the essence of account management with Tricia Gardiner

Brafton Account Director Tricia Gardiner has mastered the art of masterminding content strategies so perfectly suited for clients that they come back time and again. What’s her secret? Let her tell you.