Sometimes, the road to becoming a content marketing leader is a long and winding one. That was the case with Gray Bouchard, who found his way to a role as Brafton’s Associate Director of Project Management by never losing touch with writing, and never losing sight of what content is or why it matters.

He’s also a rock star, but we’ll get to that.

Been there, done that

Gray’s path to Brafton had many, many stops. Finding the links between some of these roles is a little tough.

For instance, what does an optician have in common with the manager of a Starbucks, or a seller of used musical gear or vintage magazines and books? Gray did all of those things, as well as working as the Head of Acquisitions and Development at Troma Entertainment.

As for that last one? “Look it up, just not on your work computer,” Gray says.

The one post that seems to point the way forward is a stint as a junior copywriter, as well as the fact that Gray never stopped writing, both to fulfill his own interests and as a freelance sideline.

He took a position as a content writer at Brafton four years ago and a new journey began.

Still doing a little bit of everything

Settling down with one company doesn’t mean doing the same thing every day. As the leader of the project management team, Gray has many irons in the fire during his busy workdays.

“Between managing the PM team, working with select clients, coordinating work from our sister company and collaborating with other internal teams, there’s never a dull moment.”

To let him tell it in his own words: “Between managing the PM team, working with select clients, coordinating work from our sister company and collaborating with other internal teams, there’s never a dull moment.”

While he’s being pulled in many directions, Gray still has considerable autonomy in his role, and that’s the way he likes it. He joined the company at a moment when the project management function was on the rise, and he has taken the evolution in stride, ending up at director level and flexing his leadership muscles.

In his four years of Brafton work, Gray has racked up a few accomplishments he’s particularly proud of:

What it all means

Through his rise to project management leadership, Gray has developed a clear-eyed view of what it means to bring projects to completion. In a world of ever-changing processes, managers have to possess great time management, capable organization and endless adaptability. 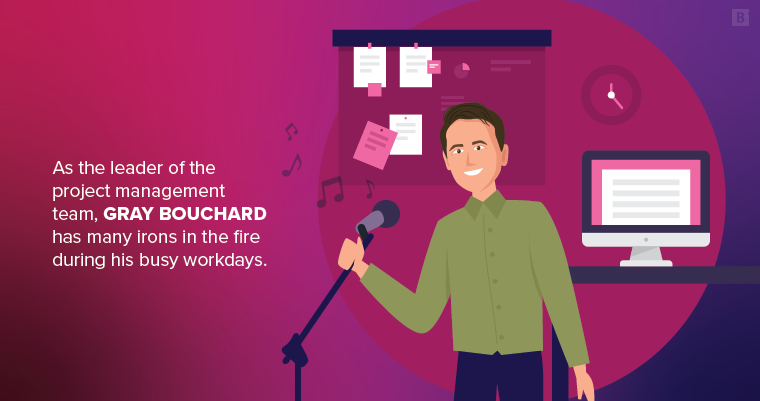 As for what goes into good content creation in general, Gray has a theory about that, too: He believes that it’s wise to step back a bit from the term “content.”

“‘Content’ conceptually can feel so abstract, like it’s just something you put in a box and the box is suddenly full,” he says. “But the box is someone’s brain, so you have to be incredibly mindful of what you’re trying to get in there. You have to consider how to spark the imagination and interest of your audience, not just fulfill an abstract, seemingly endless need.”

Content should be useful, exciting and purposeful. Good content marketing is about finding those traits, rather than just churning out words.

What does an Associate Director of Project Management do after hours? He leads an acclaimed rock band in the Greater Boston music scene.

“You have to consider how to spark the imagination and interest of your audience, not just fulfill an abstract, seemingly endless need.”

Formed in 2015 with his friend Harrison and brother Maurice, Salem Wolves have been playing every venue in town since they had four songs to their name. Now they have two albums and an EP, with another EP and album on the way. The band’s present lineup is built around Gray’s singing and songwriting, with Cat on bass, Chuck on guitar and Eliahu on drums.

The band has performed at Boston Calling’s summer performance series, earned a signature beer with a local brewery, scooped up nominations for the Boston Music Awards and opened for everyone from Ash and JEFF the Brotherhood to the late great Roky Erickson of the 13th Floor Elevators, a personal hero of Gray’s.

While a history like that would be enough musical activity for some, Gray is also one album deep into a solo career, with another record on the way.

Keeping busy overseeing every aspect of content marketing during the day gives way to gigs and recording sessions in his free time. The thread that ties it all together, music and marketing, is his inspiration.

What more is there is to know about him, on top of the quick rise to content leadership and the band racking up accolades?

“My uncles were in the Blue Öyster Cult?” Gray ventures. 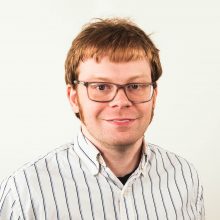 The career path that brought Mara to Brafton went from fine art school to the culinary world and back to the visual side of things.