In Boston, the month of April brings joy to the entire city. We’ve definitely got baseball and often times we have playoff hockey and playoff basketball. It’s often the time of year that it finally gets warmer and us Bostonians get to break out into the outside world after our harsh, cold winters.

April also brings the Boston Marathon. I’ve told you about our own Emily Clark running in the marathon before. Yet, we had a lot more Braftonites running around Boston (and Chicago!) this month too.

From a few local nonprofits to a charity that hits close to home, here at Brafton, April was about running, fundraising and, of course, content marketing.

As part of an effort to give back to the community, Brafton works with a handful of nonprofits on a pro bono basis to help them help others. One of those nonprofits is an organization named 826 Boston, a branch of 826 National. 826 is a nonprofit youth writing and publishing organization for students ages 6 to 18. The goal is to encourage and empower students through writing, while also giving them the opportunity to have their work published.

Social Media Strategist Anna Mattis works closely with 826 Boston on their social media marketing efforts. After sharing some of the entertaining, sometimes heartbreaking, and often hilarious stories and poems on social media, Anna knew she couldn’t resist joining this event.

“I wanted to participate in the Half x5 Marathon to help raise money to support their programs and give others at Brafton the opportunity to support them,” said Anna.

And we did just that. Anna rounded up a group of people to create Brafton’s team, I Thought This Was A Pub Crawl. (The name was voted in by an office-wide naming contest.)

Catching up with the winner, he said training was really tough.

“My trainer put me on the horizontal running program; two hours a day, seven days a week,” Ryan told me.

He did also win a gift card for free grilled cheese, so for him, the hard training was worth it in the end. Ryan told me words couldn’t describe the amount of fun he had.

As for the other award? Well, the rest of the team were not as athletic as Ryan and instead moseyed around the Boston Common, earning the prestigious title of Last Place.

Patriots Day is a huge day here in Boston. One, because of the Marathon and two, because nearly everyone has the day off. If you don’t, you usually take the day off. I am happily guilty of this. The excitement of getting to watch people cross any marathon finish line is a great feeling.

But the best feeling comes when you get to watch two of your own do it.

I’ve told you all about Emily’s journey to the marathon, but we never told you about another one of our superstars who was also running the historic race. 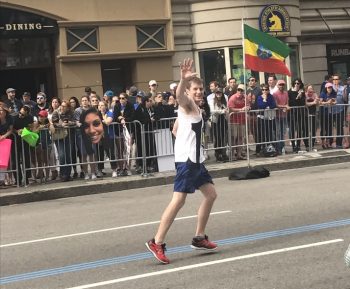 A smiling face as John nears the Finish Line

John Evans, a Content Marketing Specialist, ran the 26.2 miles on that Monday alongside Emily.

Just like Emily, John says training was rough. With this marathon being in the spring, he had several snowy and single-degree days to train in. It was rewarding, though. John says he always got breakfast after his long runs on Sundays. I also like to reward myself with breakfast on Sundays, but certainly not because I ran before it.

John said he definitely wants to try to run Boston again but in less time the next go-around.

“I felt really good during the first half and definitely hit a wall around Mile 18, I think I dropped from nine-minute miles to 11-minutes ones.”

Despite his drop in (a still really impressive) pace, John said he felt great afterward because he got to stop running. OH – he also got a shiny new medal and someone to share it with – his dad. The father/son duo ran the marathon together. John told me his dad has run around 50 marathons, so he had to try it at least once.

(I’d just like to take a moment to thank both my parents for not running marathons so I don’t feel like I need to try one.) 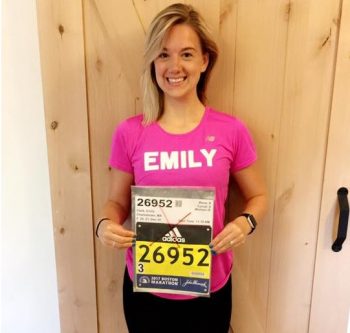 Our other marathon star, Emily, said she’d also want to run again. Catching up with Emily post-race, she’s still amazed that she was able to not only reach her fundraising goal but surpass it. The Marathon was an amazing experience for Emily.

“I didn’t know it was possible to experience literally every emotion in one day.”

All the emotions Emily felt paid off in the end, though. She crossed the finish line and was able to take it all in while seeing many familiar faces along the route cheering her on.

The crowds at the Boston Marathon are often described as unbelievable. From Mile 1 to Mile 15 to the last few miles, the runners are inspired the entire way. For John and Emily, they not only had family in the crowd for support but many Braftonites there with them. While some were stuck in the office, their live feeds were up and running to watch our runners cross the coveted finish line.

The Race For A Cure

Sonny with his mom, dad, and daughter

Chicago’s Sonny Sharp, an Account Director, recently ran in and fundraised for a Breathe Deep event in the Chicago area. For him, it was a chance to support a cause that hits close to home for his family.

“I don’t think I will ever forget the moment I heard the oncologist tell my dad ‘this looks like lung cancer’,’” Sonny said.

Despite having not run a 5k in years, the moment Sonny got the text from his mom about this event, he knew it was something he wanted to do everything he could to support. Sonny also knew that his family here at Brafton would be behind him 100 percent in his run and his fundraising efforts.

The LUNGevity Foundation was nothing short of awe-inspiring, Sonny said. From the outpouring of love and support to the thousands of people who gathered to support the cause. Sonny learned a lot on race day, but the most important?

“I learned that no matter what, you can never give up hope, and you always have to keep fighting.”

Sonny is very proud of his dad for fighting and says he wouldn’t be the man he is today without him. Despite feeling exhausted when he crossed the finish line, Sonny was also filled with hope that next year his dad would be running it alongside him.

Brafton runs on a lot of things from coffee to baked goods, fundraising, and passion. Check out our latest job openings to join in on our fun. We promise we won’t make you run.