What do you get when you combine a wood-whittler, a former mosquito conqueror, and a marketing whiz?

You get Brafton’s own Director of Digital Marketing Strategy Jeff Baker!

Whether it’s creating engaging and effective strategies for the Brafton brand, doling out his expertise in all things content marketing, or diving deep into analytics, Jeff works hand in hand with Brafton President Tom Agnew to ensure the Creative Marketing team is a well-oiled content-making machine.

Jeff has been with Brafton for five years, and before moving into his Director role, worked as a Content Marketing Strategist. This position gave him valuable insight and experience, and it allowed him to expand his creative skills as well as his analytical strengths.

“The combination of psychology and analytics is what drew me to content marketing, as it lets me use both sides of my brain,” he said. “You get to create, then read the numbers to see how your creation influences people. I live for this – there is nothing else I want to do.”

However, it can’t go without being said that while content marketing is his passion, he had quite an interesting job before Brafton. Jeff attended Sonoma State University for marketing, and during his time in school, he worked as a Mosquito Abatement Technician to help pay for classes.

“I went out on marshes in aquatic tanks and sprayed bugs,” he explained. “I usually tell people I hunted mosquitoes with miniature bows and poison-tipped arrows.” 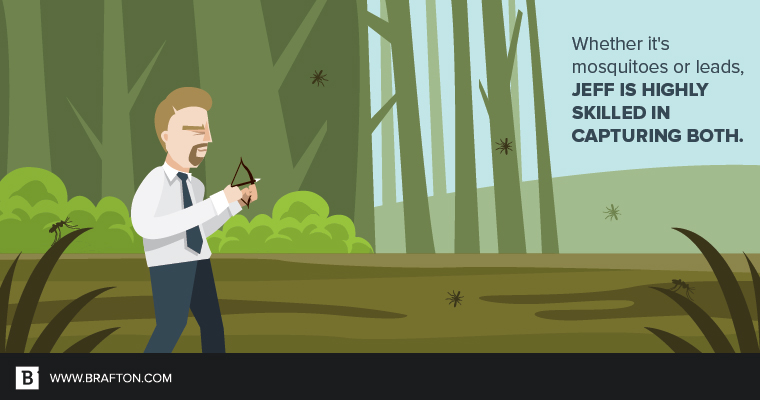 (This mental image is so great that we just had to make a custom version of it!)

Jeff took over the Director role at the very beginning of 2017, and in the months since, has led the way in the Brafton rebranding effort and worked tirelessly to enhance the company’s inbound strategy. He not only works with the Creative Marketing team to boost the Brafton blog, email marketing and site SEO, he also focuses on the Sales side to train and define the proposal process and deliverables.

But his favorite part of his job is working and collaborating with his colleagues.

“This team has passion, drive and talent. So much talent,” he said. “I like being able to get excited about an idea and literally nobody tells me ‘No, you can’t do that.'”

With that said, the rebranding strategy hasn’t always been a walk in the park. Jeff says that the team had to essentially start from scratch, and that includes everything: email marketing, SEO, blogging, website restructure, and much more. But with his positive attitude, he also sees this hurdle as proof of how far the effort has come and what has been accomplished.

“Starting from scratch gave us nothing but a clean slate to do some good stuff,” he explained. “At the same time, it’s certainly easy to trip and fall on your face.”

One great thing about Jeff is he’s not afraid to get his hands dirty when it comes to Brafton’s strategy. He often writes articles that dive deep into a plethora of content marketing topics, and he makes sure the team is fully equipped with the tools it needs to get the job done. For example, Jeff developed the new keyword research project from beginning to end, which included writing the guidebook, launching the email campaign, and setting up a free on-page optimization consultation giveaway.

And he lets his fellow team members pick his brain about any and everything. This is a great strength to have as a Director.

With his vast array of knowledge and his years of experience in the industry, Jeff sees how content marketing is changing, and knows how brands should adapt.

“When it comes to the future of content, companies shouldn’t be afraid to have a voice and an opinion on their blogs,” he said. “Businesses get so hung up on the ‘messaging’ and the correct ‘style and verbiage’ that two things happen: First, blogs never get out the door, which is the exact point – they are blogs, not Pulitizer-prize winning epics. And second, those blogs that do get out the door have been neutered to the point that nobody cares about them.

“Safe is boring – it’s not even noisy enough to be called noise,” he added.

How about some of the older marketing methods that need to be phased out? It’s not even a question for Jeff.

“Stock images, plain and simple,” he said. “Everyone around here knows I’m a tyrant when it comes to these, but somehow they just keep hanging around the industry. Stock photo equals stock content. It’s an uninspired, zero-value add.”

For those who are interested in a career in content marketing (because who isn’t?), Jeff said there are several qualities one needs to have to be successful, and some of them are conflicting.

For example, he explained that people interested in the industry need to be super-organized and analytical, while also being creative. They also need to love being around people, but should have a thick skin.

“It’s like four unique quadrants of the brain,” he said.

The man behind the marketing

While I could go on forever about his content marketing expertise, it’s also important to get a look at Jeff from a more personal side.

One of his favorite things to do is sit with his “sausage on pegs” dog Charley on his porch, grab a beer and a piece of wood, and whittle away the day.

Here is one of his creations:

Another special hidden talent of Jeff’s is his skill in ping pong.

“I used to have a table at my house and went like 200 – 0, so then I learned how to play left-handed,” he said. “I think someone finally beat me at some point.”

Surprisingly, marketing was not his career goal growing up. He originally wanted to be a baseball player, but when he found out he was not a great hitter, he put that dream on the backburner.

It’s clear to see that while he didn’t end up in the MLB, Jeff is definitely hitting it out of the park when it comes to being Brafton’s Director of Digital Marketing Strategy.