Have you heard the song “30 Days of Rain?” It’s by the Massachusetts-based three-piece rock band Aqua Hamster. Why are we talking about it? Because it’s the favorite of Tony Basile, Aqua Hamster guitarist and seasoned Brafton veteran. The Senior Writer wrote this anthem himself, recreating a story about a former co-worker who moved from small-town South Carolina to big-city Boston.

Why, considering all of Aqua Hamster’s discography, did Tony choose this song?

“It just all came together,” he said. “After three years on the shelf, we just played it and thought, ‘Oh, that went really well!’”

Tony finds similar satisfaction when writing content. With an English background, it doesn’t matter what client or industry he’s working on – when a piece comes together, it just feels right.

“The articles that are the most fun to write are the ones where I can incorporate an interesting voice or hook,” he said. 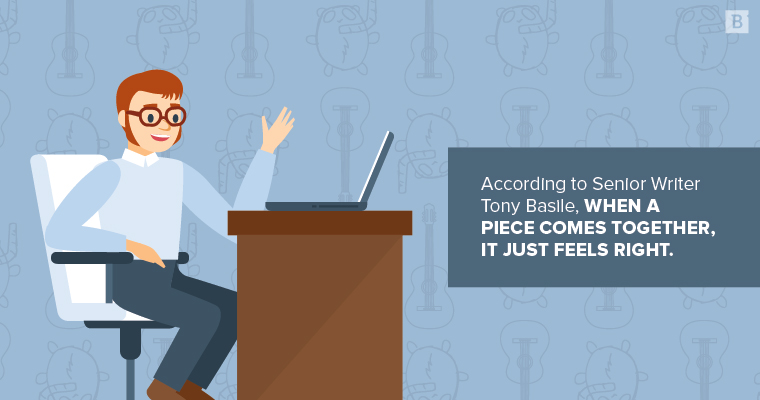 Tony didn’t plan on studying English in college; writing was just something he did for fun. Yet there came a time in his life known as “senior year of high school” when he had to choose what he wanted to study. He chose Japanese at first, but when Tony realized writing could be his career, he didn’t hesitate.

After graduating, Tony applied for anything and everything that suited his degree. The search led him to Brafton, and he knew the agency would be a good fit.

“Brafton is unique in that writing is valued as a skill here,” he said.

After a remote test to prove he was a skilled writer – something that still holds true five years later – Tony was in, and he began writing thousands of words about tech and business.

After being at Brafton for half a decade, Tony’s seen a lot of shifts in both the company and the content marketing industry. Back when content first started getting big, the name of the game was “Keyword Volume,” and companies won by writing the most blog posts stuffed with the greatest number of keywords.

Now, the best in the industry understand that quality triumphs, not quantity. This new model suits Tony just fine.

“The ability to connect with what you’re writing is important,” he explained. “If you just regurgitate sources without thinking about things, [the content] will be very generic. You have to be both quick and thoughtful.”

Each writer has their own idea of a typical day here at Brafton – some like to dive right in to the content, while others prefer to take care of administrative tasks first. Tony falls in the latter camp, spending his mornings answering emails and prepping for meetings, then writing throughout the afternoon. That said, he doesn’t exactly believe in the idea of a typical day, preferring a more flexible mindset.

“That’s one of the things I like about writing,” he explained. “It’s based on the amount you do rather than being in a specific place at a specific time.”

Content marketing has rapidly evolved in just a few short years, and another shift may be on the horizon. For Tony, some of the signals of change are the recent developments at various media outlets.

“There’s been talk in online news media about decreasing use of the written word in favor of video and interactive content,” Tony noted.

Newsweek wrote an interesting analysis of this shift, if you’re curious.

“I expect that some people will try and apply that to content marketing,” Tony elaborated.

It makes sense, and as Tony noted, video in and of itself isn’t bad.

“I welcome content that’s shorter and more focused, but if it’s completely at the expense at the written word – I think that’s too much,” he said. “I still think there’s a role for [written content].”

After all, he added, some people would rather consume their content in other ways.

“Where are people reading and watching [this content]?” he asked. “I write for a business audience, so they’re at their desks. They might not have headphones plugged in, they might not feel like watching a video at that moment. The written word’s still got something in the tank.”

I write for a business audience, so they’re at their desks. They might not have headphones plugged in, they might not feel like watching a video at that moment. The written word’s still got something in the tank.

Elaborating on that point, Tony said he’d like to see the content marketing industry further embrace the concept of writing as a creative medium.

“We can still have corporate websites, but they can be a little more refreshing,” he added. “Reading these posts doesn’t have to be like eating your vegetables.”

So what takes a piece of content from mushy microwaved broccoli to a golden creme brulee?

“The articles with a conceptual hook are the best,” Tony said. “Shorter pieces, with a point and a voice. If the written word is gonna stay as relevant as video and audio, we have to make it fun to read.”