Ryan Collier, a New England boy through and through, found himself in a small Boston office in the middle of July with a simple mission: wrangle new clients for a young service then known as “article marketing.”

The conveyor of said service? A wide-eyed 2007 startup ready to cash-in on the newly emerging content marketing space.

It was called Brafton, and Ryan saw that it was good.

‘We were onto something big’

But even Ryan couldn’t have predicted that this would turn into an 11-year journey. 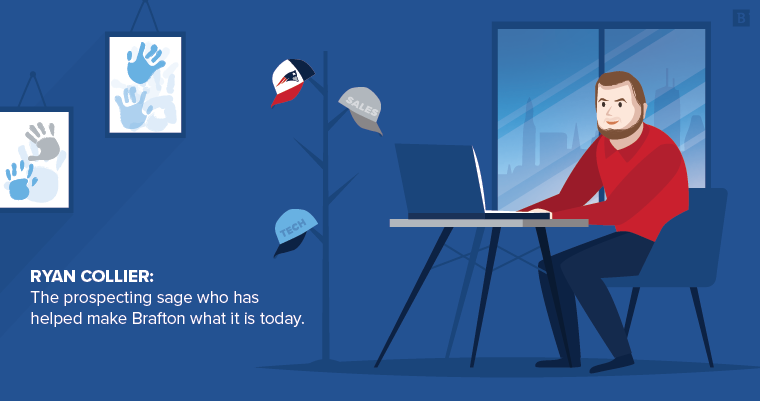 In the early days, he took on the role of “Marketing Research Executive.”

“My job at the time was to research marketing prospects that would be likely to purchase our services,” Ryan said.

The criteria for a promising prospect in 2008 came down to two factors: “Does the company have a website and are they a marketer?”

It truly was the genesis of our industry. No one really knew what content marketing was, and Brafton’s service was a blunt instrument: 40 200-word articles per month for each client. That’s all the market needed at the time. Google’s algorithms were still in their infancy, and the internet was less than half the size it is today.

As Ryan recalls it, a good part of any prospect meeting was spent simply explaining why businesses needed content on the web, and that often sold itself. He spread the good word, brought in new business, and made the occasional run to Staples for more printer paper and ink—whatever was needed to help get Brafton on its feet, which he did:

“We started to grow within the first couple months,” Ryan said. “And we hired two new writers, Francis Ma being one of them.”

For conext, that statement is akin to a 2000 Bill Belichick saying, “We just hired this new kid, Tom Brady,” a few months into his tenure with the Patriots. Or if Yoda had said, “Hired this new kid named Obi Wan Kinobi, we did.”

Francis Ma is a bit of a Brafton legend, and the fact that Ryan predates him truly speaks to his mythical status at this company.

The Patriots have since earned their sixth Superbowl title, none quite as sweet as the 2014 win over the Seahawks if you ask Ryan, who “lives and dies by the Patriots,” and who is now the Associate Vice President of Sales Operations in the Boston office.

His mission is anything but simple these days: reduce friction in the sales process to allow Brafton to increase production and revenue.

One might even say Ryan has earned six titles of his own:

At work and at home, Ryan summons the same sense of duty and grit that made him so invaluable to Brafton’s upbringing:

“I believe in Bill Belichick’s slogan of ‘Do your job’ and I take that approach at work and outside of it,” Ryan said. “You get done what you need to get done, even if that means spending half the night awake dealing with the kids when you have to be up at 6 a.m. for work, it is what it is.”

I believe in Bill Belichick’s slogan of ‘Do your job’ and I take that approach at work and outside of it.

When his nose isn’t to the grindstone, Ryan takes day trips to Cape Cod with his wife and kids, tees off at the green, or just enjoys a moment of peace on the couch, preferably with a Buffalo chicken pizza, a Budweiser in hand and the Patriots on the TV.

Ryan likes to go to sleep early, (what with the kids and the nightmares of the Eagle’s 2018 triumph over the Pats).

But if he seems aged to his colleagues, it’s less about his sleeping habits or his calm voice, and more about the fact that in Brafton years, he’s basically ancient.

There are maybe three other Brafton employees in the decade-plus club, one being Francis Ma, the second being Max Christopoulos and the third being Tom Agnew, a.k.a. Mr. Brafton himself.

“One of the reasons I’ve been at Brafton so long is that I trust in management and in the product, and I really believe in the vision of the company.”

One of the reasons I’ve been at Brafton so long is that I trust in management and in the product, and I really believe in the vision of the company.

Don’t be fooled by his graciousness and modesty. Ryan’s sales prowess has been instrumental to making that vision a reality, and to getting the company to where it is today.

Where does that leave us?

Each day, Ryan Collier, a New England father of two, through and through, finds himself in a reasonably sized Boston office at a successful content marketing company with one mission: Continue the great work he’s been doing for the past 11 years.

He delivers on that mission with a dedication to excellence that even the great Bill Belichick can appreciate.

“I could use a guy like Ryan on the roster,” the legendary Patriots skipper and six-time Vince Lombardi Trophy winner said, possibly. “Brafton really is lucky to have him.”