Senior Writer Autumn Green has been with Brafton for nearly two years now, but, as she describes it, it was “pure luck” that allowed her to find her role at the company. After a long and strenuous move – encompassing an almost 1,000-mile journey – Autumn found herself in a brand new city, and was ready for anything that might come her way.

While many Brafton writers have a background education in English or journalism, this isn’t always the case. However, as Autumn found, it’s the variety of different environments that writers come from that help create a truly unique team.

In college, Autumn studied illustration, a passion that she thoroughly enjoyed. As she continued in her studies, though, Autumn felt something was missing.

“Art school was exactly like you’d expect: heavy on drawing and color theory, light on research and writing,” Autumn said. “I missed that – I always liked writing papers in high school.”

And while she no longer paints, Autumn still loves art, and is a frequent visitor to Chicago’s art galleries and museums.

Dreams of the big city

After moving from Raleigh, North Carolina to Milwaukee, Wisconsin – and eventually Chicago – Autumn began her journey to find a job that would allow her to pursue her writing passion. And it was at this juncture that a stroke of luck brought her to Brafton.

After a two-month long search of a variety of online job boards, Autumn said she stumbled upon Brafton’s post on Craigslist.

As a fellow Senior Writer who also discovered Brafton through a Craigslist post, I can understand Autumn’s feeling that she struck gold.  Finally, her search was over, and Autumn was in a city and a career where she felt she belonged.

A workaholic at heart

Autumn began as a Content Writer and eventually rose to Senior Writer status, becoming the driving force behind an array of content pieces for clients in a number of different industries.

This Jane of all trades has written content for organizations in the education industry and the business sector, as well as on topics as varied as wellness, leadership and corporate management.

It seems nothing is out of reach when it comes to Autumn’s writing chops, especially as she considers herself a workaholic.

“I’d also say that’s true of anyone in this office,” she said. “It doesn’t matter what we’re writing about; we’re all dedicated to the craft of writing itself – or video or design or what have you – and none of us are satisfied if we do less than the best.”

At the same time, it’s this above-and-beyond spirit that helps Autumn tackle tough assignments with a sense of grace. For Autumn, the motivation behind her work at Brafton is reminiscent of her first job after college at a used bookstore. 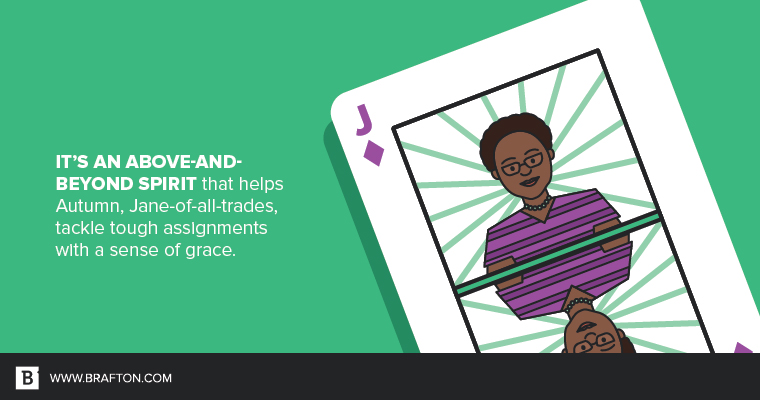 “We’d have customers come in looking for a specific title, but since we were a secondhand store and our inventory was based entirely on chance, they rarely had high hopes,” Autumn explained.

“But sometimes, they’d tell me the title, and I would know we had the book in stock and could lead them straight to it. It doesn’t sound like a big deal, but people would get so happy and excited when I could point them to exactly what they were looking for, especially when they weren’t expecting it.

We’re all dedicated to the craft of writing itself – or video or design or what have you – and none of us are satisfied if we do less than the best.

That feeling is my favorite part of interacting with clients. When I nail a piece of content and I can hear the satisfaction in the client’s feedback, I feel just as great as I did when I handed someone their new book.”

‘I’ve got their backs’

One of the things Autumn enjoys most about Brafton is the supportive environment found throughout the company. At first, Autumn recalls being nervous about joining a team of professional writers. However, the training and encouragement she received from her co-workers quickly quelled those concerns.

“I can’t stress my love for my co-workers enough,” Autumn gushed. “Starting at Brafton wasn’t just the beginning of a new job for me – it was also the end of a major move. Their help made that transition so much easier for me. Everyone was fantastic about helping me develop professionally, and I know I can count on them if I’m having an issue now.

And, of course, I hope they know I’ve got their backs, too.”

Globetrotter Stacy Randel on why she calls Brafton home

From the shores of La Spezia to the mountains of Central Asia, Associate VP of Sales Stacy Randel has a serious case of wanderlust. But she’s busy putting down roots as Brafton’s resident master of all things sales.