The internet has not only transformed how we communicate, but it’s also changed the face of marketing – or, more precisely, consumer expectations regarding marketing.

Successful inbound marketing depends on everything from blog and social media posts to search engine optimization. And content is the cornerstone of all of it. 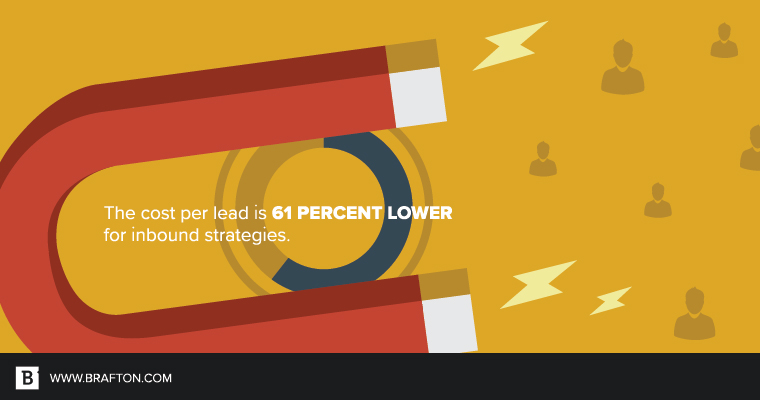 Every consumer has a world of information at their fingertips. Questions about products and services can be answered with the click of a mouse. But is it your content they’ll find?

“Inbound marketing is like creating a magnet,” said Jeff Baker, Director of Digital Marketing Strategy at Brafton. “If somebody’s walking by, that magnet is going to suck them in. Basically, you’re putting things out there to entice people to knock on your door.”

While salespeople have always had a colorful reputation, the process of outbound marketing has become increasingly stigmatized.

“The term ‘cold calling’ just sounds bad,” Jeff said. “It’s not personalized; it’s robotic. It turns people off. No one wants to be interrupted anymore. People actively avoid it.”

Meanwhile, it’s hard to argue with the effectiveness of inbound strategies.

“At Brafton, of all the inbound leads that turn into a meeting, they convert at a rate of 20 percent,” Jeff continued. “Outbound converts at 3 percent. The conversion rate is almost seven times higher for inbound leads.”

There are upward of 287 million internet users in the United States alone. Each one of them is an outbound marketer’s worst nightmare. Access to information has empowered modern consumers, putting them in the driver’s seat. The days of being wooed by fast-talking salespeople are done.

“With inbound marketing, when people come to you, they’ve already done 80 percent of your job for you thanks to the internet,” Jeff said. “They have a need, they shopped around, evaluated your competitors, researched your products or services. And they’ve chosen you. There may be other vendors in the running, but they’ve narrowed their list. They’ve prequalified themselves and indicated they have an intent to buy.”

Simply put, inbound leads are people that want to be sold.

“With outbound marketing, prospects don’t have an intent to buy,” Jeff continued. “They probably don’t even know who you are. You’re starting at 0 percent instead of 80, trying to create a need and explain who your brand is and what the products are. You have to build the entire story from scratch.”

The cost of doing business

Seventy-three percent of marketers said inbound is their primary approach to marketing, according to HubSpot’s “The State of Inbound 2016” report. Only 24 percent cited outbound. Additionally, organizations focused on inbound marketing were four times more likely to rate their strategies highly.

“You have to create quality stuff,” Jeff said. “You have to explain who you are, and create compelling content that not only details your products and services, but shows that you know your stuff. People have to be sure you know what you’re talking about.”

That requires time, talent and strategic planning. But the payoff is worth it, and goes well beyond leads.

“Content marketing provides prestige for a brand,” Jeff said. “It’s an intangible, but it’s important. You want your branding to pop into people’s heads. You want them to think of you when they hear something about your industry. Yes, content brings in leads and helps with SEO, but it can give you a bigger share of the market in other ways. Brand recognition is huge.”

Your share is out there, but you have to reach out and take it. Making quality content the cornerstone of your inbound marketing strategy is the first step.