The web has democratized communication, making it possible for anyone with a blog and an internet connection to potentially reach millions of people around the world.

It’s also transformed how brands interact with consumers, particularly in terms of social media marketing. With a stronger emphasis on authenticity and a general rejection of traditional marketing techniques, the days of old fashioned advertisements have given way to a new frontier dominated by “social influencers.” 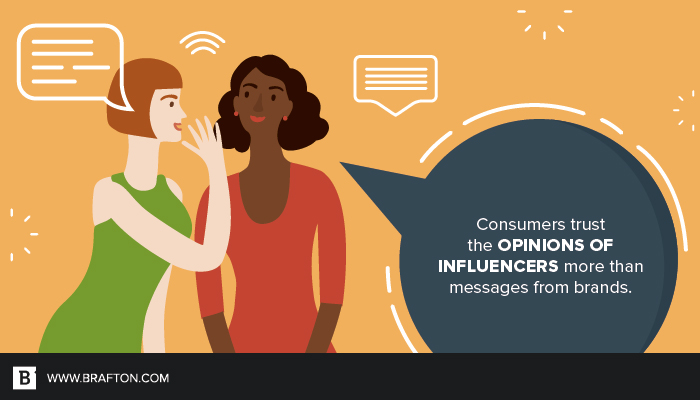 The anatomy of an influencer

According to Allie Stone, Associate Director of Social Media at Brafton, a social influencer is someone with credibility or trustworthiness in a specific industry or space.

“Usually they have a larger following than the average person, and brands want to tap into that in order to share their product or brand message,” she said. “Utilizing social influencers allows brands to reach their target audience in a new way. It broadens their reach and they can tap into the credibility of the influencer. It can also be cheaper than old-school influencer marketing when brands had to hire a celeb to be featured in a TV spot.”

Long story short, consumers trust the opinions of influencers more than messages from brands. In an online landscape where users actively avoid advertisements and other forms of brand messaging, influencers represent a platform consumers will actually pay attention to, if not actively seek out.

Data from Twitter showed 49 percent of survey respondents rely on influencers for product recommendations. That’s second only to actual friends, who 56 percent depend on.

“Think of social influencers as a cross between industry thought leaders and celebrities.”

Before working with a social influencer, it’s important to narrow your focus.

“A brand would want to get involved with any influencer in their space that has a social authority,” said Erin Hancock, Associate Manager of Social Media at Brafton. “But it’s important to do your research to make sure you’re reaching influencers that can tap into the audience you want to reach.”

Be sure an influencer’s values are in line with your brand as well. Someone who posts raunchy videos on Instagram may have lots of followers, but is that something you want your company to be associated with? (If it is, then by all means reach out to them!)

Also find out if the influencer is currently promoting other brands. An individual promoting multiple companies may not have your best interests in mind, and may lose influence if they’re seen as inauthentic mouthpieces trying to shill products.

“Begin with an introduction and nurture the relationship from there,” Allie recommended. “Prove your worth to them and give them some creative freedom. Allow them to offer insights on how they think you could work together best. Try sending them a free product or service voucher. They have the power to persuade their following who long for a similar lifestyle. They want to see what they buy and where they bought it. Their followers love to hear their reviews on products or services.”

The future of influence

Think of social influencers as a cross between industry thought leaders and celebrities. Whether you should work with one as part of your social media marketing strategy ultimately comes down to what makes the most sense for your target audience and business goals.

That said, there’s no denying these figures will continue to grow in power. And while big names may seem out of reach for smaller businesses, the pursuit of authenticity will likely open up the door to more niche influencers for companies of all sizes.

“Social influencers are just getting started,” Allie said. “More and more brands are putting budget into influencer marketing. With focus on quality over quantity, I think lower-level influencers will continue to see more success. Marketers want to tap into their authenticity and want to avoid the celebrity status of some of the bigger influencers.”

It’s a brave new world, and social influencers are on the cutting edge of digital content marketing. Make sure you don’t miss out.

How well-defined are your personas? Check out these examples and how to best apply the lessons to your own marketing efforts.