As the saying goes: Two wrongs don’t make a right.

So how many wrongs does it actually take to make a right? I’m going to venture a guess and say none – there isn’t any number of wrongs that automatically translate into a right.

But hey, you never know, there could be some kind of conversion tool for that. If you find it, hit me up.

When it comes to B2B marketing, there’s a lot you’ve got to get right to guarantee a successful campaign. You must put the right message in front of the right people at the right time on the right channel.

Sometimes, getting all of that right doesn’t happen. And that’s okay. It doesn’t mean you’re doing it wrong.

But then there are those few instances in which B2B brands just get it too wrong. I mean, too wrong that it’s going to take a whole lot of fixing to make it right (if that’s even possible).

Thankfully, there are lessons we can learn from these mistakes. That’s why we’re listing them out here, so you can avoid making huge blunders that could hurt your brand or turn it into a marketing laughing stock.

Here are five examples of B2B companies getting it way wrong. Get ready to cringe:

(Warning: If you’ve recently or are currently eating, maybe wait a bit before hitting that play button.)

If you’re like me, you don’t do well around other people vomiting. It doesn’t matter if you’re right next to the person or watching it on TV, anytime someone tosses their cookies, you get that queasy feeling in your stomach.

Well, Microsoft certainly didn’t take us into account with this advertisement.

The software giant, in an attempt to promote its new version of Internet Explorer, tried to strike a humorous tone with this commercial, and it even enlisted the help of a (at the time) celebrity figure (c’mon Dean Cain, why didn’t you try to talk Microsoft out of this?). Unfortunately, the brand took it too far, leaving viewers sickened by the sight of the puking lady.

By the way, do we even want to know what she saw on that screen that made her vomit? Maybe that guy deserved that slip and fall.

Speaking of throw up, we’re throwing up our hands in frustration and disgust at this ad.

Back in 2010, British Petroleum’s Deepwater Horizon drilling rig, located in the Gulf of Mexico, suffered an explosion that caused approximately 210 million gallons of oil to spill into the surrounding ocean water.

The oil threatened marine life and quickly made its way ashore across Louisiana, Mississippi, Alabama and Florida (I’m originally from the Gulf Coast region, and I remember seeing the sugar white sand beaches stained from the oil, as well as tar balls that washed up).

The effects lasted for years, despite vast cleanup efforts in the Gulf.

Besides the horrendous environmental impact that resulted from the oil spill, BP’s response was the stuff marketing nightmares are made of.

At first, BP CEO Tony Hayward refused to take blame for the disaster, instead pointing the finger at the company that made the drilling rig. He also said that when compared to the amount of water surrounding it, the oil spill was small.

The Deepwater Horizon incident turned out to be the largest marine oil spill in history. The company continued to issue press releases and official communications that downplayed the effects and put the fault on others.

While this example is certainly not as funny as the others on this list, there’s still a lot to be learned from the corporation’s response; Mainly, that you’ve got to take responsibility for your mistakes.

When the lives of people and wildlife are at stake, you can’t afford to make any public relations or marketing blunders. 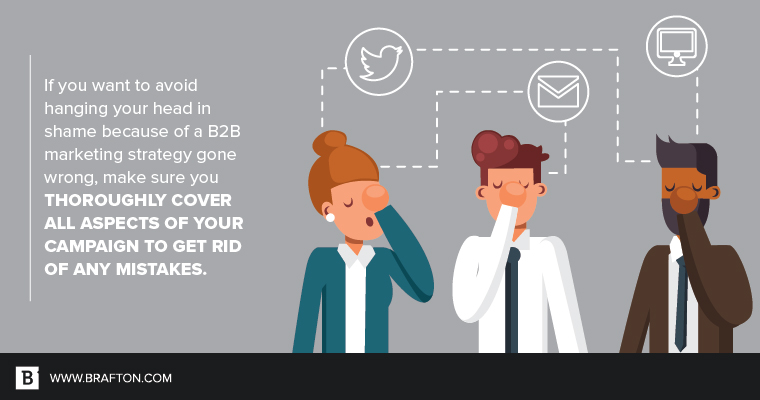 3. Set up shop in Rhode Iceland?

However, in one video produced by the Rhode Island Commerce Corporation, scenes from Rhode Island were interspersed with landscapes from Iceland. Yikes.

Those from outside Rhode Island may not be able to spot the differences, but RI residents sure did, and they let Gov. Gina Raimondo know when she tweeted the video (which for some reason is still up).

Only a short snippet from Iceland was used, but it was enough to show that the Commerce Corporation didn’t closely edit (or maybe care) about the marketing video. The organization quickly issued an apology and stated that it hired a local business to make the video.

For something that cost $5 million to produce, you’d think there would be time to make sure only Rhode Island is featured in it.

Moral of the story: Double, triple and quadruple check what you’re putting out there lest you end up falling on your face.

When I was a kid, the toys marketed toward girls mainly consisted of baby dolls, dress-up princesses, play kitchens and house cleaning tools

But for some reason, IBM thought it would be a good idea to market to women in the same vein. The goal of the campaign was to appeal to females interested in the STEM  – science, technology, engineering and mathematics – fields.

Many complained that the video came across as sexist. Did the brand think it could appeal to their audience only through messages that featured objects used generally more by women? What’s next? Hack your laundry? Hack your shoe shopping?

It’s clear that IBM did not think this strategy through, and instead of drawing women in, it turned them off from the brand.

You have to always understand and empathize with your audience. Your messages should be crafted around what you know they respond to, not what you think they do.

Microsoft makes the list twice – the second time for creating a Twitter bot that took a bad turn.

What happened was not so much Microsoft’s fault, but the corporation definitely should have weighed all potential pitfalls when coming up with this feature.

In March 2016, Microsoft introduced Tay, an artificial intelligence chatbot on Twitter. The goal of Tay was to converse with others by simulating human language that it gleaned from Twitter users. As we all know, there are plenty of people on the internet who relish the opportunity to ruin things.

It didn’t take long – less than 24 hours, in fact – for Tay to adopt the language of those who were tweeting at it.

I won’t embed any of the tweets here, as most of them cross the line. But if you are inclined, please feel free to look them up.

Microsoft quickly realized its mistake and deactivated Tay, but the damage had already been done.

There are many B2B brands out there that get it right with their marketing strategies, but there are plenty that get it wrong. Just make sure you’re not taking a page out of any books from these examples.