The 1990s were the height of American culture. No one denies this.

It only makes sense, then, that some of the most totally tubular and radical marketing campaigns to ever be conceived came out of the same decade that gave us the timeless combination of Zubaz pants, Starter jackets and LA Gear light-up shoes (with a whole slew of slap bracelets, obviously).

Submitted for the approval of the Midnight Society of Brafton Blog Readers, I give you the all-time best ‘90s marketing campaigns (cue the ominous campfire): 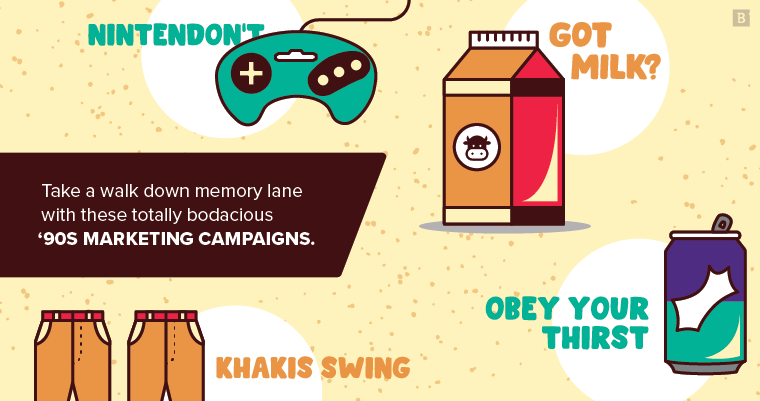 Got Milk? – California Milk Processor Board

How do you make milk, of all things, cool? And in a decade synonymous with sarcasm and cynicism, no less? That was the seemingly insurmountable challenge that the California Milk Processor Board wanted to address in 1993. Working with advertising firm Goodby, Silverstein & Partners, the organization put together an ingenious marketing campaign that tapped into milk’s status as a staple of the American household.

Milk may not be flashiest product to hawk, but there’s no denying that it plays a central role in many people’s daily lives. From that bowl of cereal in the morning to the dash of cream in a cup of coffee to the glass of milk to go with dinner, it can be tough to imagine going more than a few days without your regular dose of dairy (apologies to all the lactose-intolerant readers out there).

The resulting iconic ‘90s marketing campaign centered around the idea that running out of milk was a dire situation to be avoided at all costs. The implied message being you better stock up on milk so you’re never left high and dry. Boob tubes all across America were bombarded with a series of commercials depicting increasingly absurd scenarios that drove home the horror of going without milk for more than, like, a few minutes, tops.

In one particularly bizarre example, a man is killed after getting hit by a truck and goes to his own personal heaven filled with comically large chocolate chip cookies. In a twist ending that predated both “The Usual Suspects” and “The Sixth Sense,” the man discovers to his horror that the refrigerator is filled with empty cartons of milk. An eternity of eating cookies with no milk? Yeah, he landed himself in hell, all right.

But the most famous “Got Milk?” commercial of them all centers around the biggest Alexander Hamilton fanatic in the world and his inability to answer a simple piece of trivia because his mouth is full and he’s out of milk.

Aside from creating a ubiquitous advertising campaign and increasing public awareness for its product, the California Milk Processor Board also managed to get about a 20-year jump on the Hamilton craze that would eventually sweep America.

Those commercials definitely took up real estate in the public consciousness, but it didn’t necessarily make milk cool. For that, the organization launched its famous “milk moustache” ads, which depicted various celebrities enjoying a glass of milk along with a very conspicuous milk moustache splashed across their upper lip. 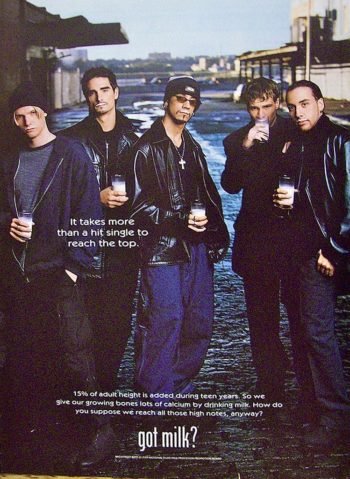 If you wanted your ‘90s target audience to think you were cool, you could do a whole lot worse than getting Dennis Rodman, Billy Ray Cyrus, Jonathan Taylor Thomas, Billy Zane and Hanson to go to bat for your product.

Back in the ‘90s, people were obsessed with being authentic and “keeping it real.” When you boil it all down, the whole grunge scene was pretty much just a big competition to see who could be the most anti-corporate band around the Pacific Northwest.

The timing was perfect, then, for Sprite to launch its “Obey Your Thirst” campaign, which explicitly called out and rejected some of the brand messaging so popular at the time that implied using a particular product would make you cool, popular or attractive. Instead, Sprite’s ads urged viewers to follow their gut – and their taste buds – when choosing a soda brand.

Let’s just set aside for a moment the specious assumption that anyone would actually pick a drink based on how cool you’d look to your friends and classmates (aside from Jolt Cola, of course). The shift in messaging worked, and Sprite’s campaign helped raise the brand’s profile immensely in the mid-90s.

The peak moment of the “Obey Your Thirst” campaign was undoubtedly the “Sun Fizz” commercial. TV airways at the time were overrun by cutesy mascots and anthropomorphised brand logos that would typically leap straight out of the product packaging to, say, help a stressed-out housewife cook a last-minute dinner for a family of four.

Sprite’s “Sun Fizz” commercial took aim at this trend by parodying those ads and depicting cartoonish brand representatives as forces of pure malice. Rather than be delighted at the prospect of Sun Fizz’s mascot (a bow tie-wearing, walking, talking sun, obviously) coming to life in their kitchen, the family runs off screaming. In true horror movie fashion, the mother trips over a vacuum cleaner and the ad comes to an abrupt end as the creepy mascot closes in.

The commercial – funny, irreverent and combative – was a masterclass in giving your messaging some bite without being mean-spirited. See Bud Light’s recent Super Bowl ads taking potshots at Coors and Miller Light for using corn syrup in their recipes as a lesson in how not to throw shade at your competition. Not only did those advertisements fail to really land with viewers, but MillerCoors recently filed a lawsuit against Anheuser-Busch claiming they contained misleading or outright false information.

The “Obey Your Thirst” campaign’s most lasting legacy, however, may be its relationship with hip-hop culture. Sprite was one of the first major consumer brands to embrace the rap community, enlisting artists like Run-DMC, Kurtis Blow and LL Cool J to be spokesmen. The very first “Obey Your Thirst” commercial showcased rappers Grand Puba and Large Professor (the story goes that Grand Puba actually ad-libbed the “obey your thirst” line, although that could be entirely apocryphal).

Even the style of the commercials themselves seems to ape ‘90s hip-hop trends, Hype Williams’ fish-eye lens approach, in particular.

Genesis Does What Nintendon’t – Sega

With just about every major video game getting released on multiple platforms, it can be hard to imagine a time when the “console wars” were fiercely fought on playgrounds across America. But the intense competition between Nintendo and Sega in the mid-90s, makes the current PlayStation vs. XBox battle look like a pillow fight in comparison.

Nintendo had the video game industry cornered at the start of the decade, with its NES console and Game Boy handheld being the undisputed champions of the 8-bit generation. But as young gamers who cut their teeth on Nintendo’s first console aged into edgy pre-teens, the company’s straight-laced, family-friendly image started to lose its luster.

Sensing blood in the water, Sega, which had just released its technologically superior Genesis console, launched a marketing campaign that went straight for the throat. Initially, the slogan “Genesis does what Nintendon’t” was a reference to Sega’s more advanced hardware that allowed for better graphics, more nuanced sound and then-immersive cinematics.

Even after Nintendo released its own 16-bit console, Sega continued its mantra, highlighting the Genesis’ faster processing speed (dubbed “blast processing” in what was maybe the most singular instance of ‘90s marketing speak).

Over time, that phrase came to represent the philosophical differences between the two video game companies, with Sega aiming toward an older target audience more interested in blood and bullets than koopas and goombas.

While Nintendo discouraged overtly violent games and depictions of blood and gore, Sega revelled in it. When the wildly popular and controversial arcade game, Mortal Kombat, was ported to consoles, for instance, the Super Nintendo version was completely bloodless. Meanwhile, Genesis owners could get the full arcade experience (albeit after entering a secret code).

The gambit worked. Sega may be out of the console market altogether these days, but during the ‘90s, its Genesis console sold more units than any other system in the U.S. market.

For a brief, terrible moment in the late ‘90s, swing music made a comeback. Thanks to movies like “Swingers” and throwback music acts like Cherry Poppin’ Daddies (ugh), Squirrel Nut Zipper (gross) and the Brian Setzer Orchestra (dear god, no), the swing revival was in full … swing.

Gap, of all brands, seized on this moment, creating a marketing campaign and string of commercials that became instant classics. The “Khaki Swing” was the first Gap ad to use that famous stark-white background and stage, showcasing a group of model-pretty actors decked out in khaki pants and swing dancing to “Jump, Jive and Wail.”

After the swing revival craze quickly died down, Gap moved on to bigger fish, bringing in heavy hitters like Aerosmith and LL Cool J to rep their threads. All the while, it used that empty white space to maintain consistent branding from year to year.

While the wave of ‘90s nostalgia has mercifully spared us from a Big Bad Voodoo Daddy reunion (knock on wood), consumers largely look back on Gap’s swing dance-themed pants commercial with fondness. The clothing retailer’s more recent television commercials stylistically and visually call back to “Khaki Swing,” even if they have been updated to reflect modern trends and tastes.

It just goes to show that tapping into the zeitgeist not only pays off big time in the present, but it can help companies establish a brand identity and image that serves them well for years to come. Gap managed to strike gold with “Khaki Swing,” despite the fact that it was following a flash-in-the-pan trend that become irrelevant almost as quickly as it appeared.

The ‘90s were filled with memorable (if not exactly timeless) marketing campaigns. We only wish we could spend more time reminiscing about Little Penny, Ray Charles and Uh Huh Girls, “Dogs Love Trucks,” Chili’s baby back ribs jingle and the Budweiser frogs.

Every last one of them was truly all that and a bag of chips.

How To Create a Strategic Marketing Process: 5 Steps for Success (Video + Infographic)

Your strategic marketing process provides the roadmap to cultivate valuable connections with customers and cement your brand in the perfect niche in your marketplace. Here are the most important steps to follow.