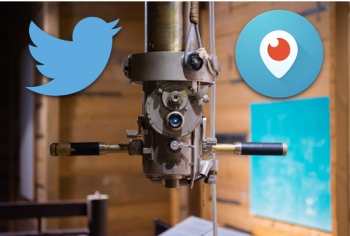 Think your live video content is more interesting than six hours of commuters jumping over a puddle in Newcastle upon Thames? The Drummond Puddle Watch garnered over half a million viewers on Periscope when it went viral, just a few days before Twitter and Periscope announced their latest integration update. Periscope (acquired by Twitter in January 2015 just before its public launch) now features seamless, native embedding on Twitter feeds, opening livestreaming to an even larger pool of users.

Twitter users will not need the Periscope app, or even an account, to stream live “Scopes” from the service (there are currently about  21 million minutes, or 40 years worth of Scopes, watched daily). Viral moments can spread even faster now that the major prohibitive step – clicking the link and opening the app – has been removed.

If a puddle in England can go viral without Twitter integration, imagine how far you c

A recent trend for services, apps and networks is to increase functionality and engagement, but keep users from leaving at all costs. The challenge marketers face is finding a way to:

A notch above the livestreaming competition

2015 was the year of budding livestreaming. Data was finally cheap enough, bandwidth was wide enough, technology was capable and worldwide FOMO was at an all-time high. Slate wrote that Meerkat, once the leading app in the personal livestream industry, raised the question:

What if the problem with webcams was simply that webcams don’t move? Of course amateur live feeds are going to be boring if they’re tethered to your living room. But these days the majority of Americans carry an HD video camera in their pocket, which they can whip out the second things get interesting.

Mobile livestreaming continues to develop for brands and people on Facebook, while services like Ustream and Meerkat have seen slower growth. YouTube, the largest video site in the world, has been venturing into livestreaming, and broadcasts presidential debates, the State of the Union, sports and more.

Tips for making the most of your Periscope Scopes

While Facebook’s foray into livestreaming might seem like it corners the market with its sheer reach and influence, Periscope, with the help of Twitter, offers value that Facebook isn’t designed to include. Facebook is optimized for the ability and ease to broadcast to the whole world, not just your network of friends and fans. Twitter, on the other hand, is widely and fully searchable, indexed by Google, and optimized for a public, global reach.

Here are our tips for effectively leveraging Periscope’s livestreaming services now that Scopes can natively embed on Twitter:

For more information about social media trends to be aware of in 2016, you can read our blogs about Making the most of social marketing in 2016 and Marketing on popular video platforms.