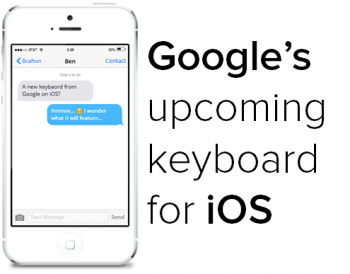 Ever since Apple’s iOS 8 was released, third-party keyboards have been available for use on iPhones and iPads. Keyboards for download include makes by Fleksy, Swype, Line, and soon, Google. The new keyboard, currently being tested, will be Google’s first step into Apple’s keyboard territory.

Their goals? To increase their mobile search volume, redirect search traffic to Google rather than Apple and Microsoft, and possibly collect additional search data and fine-tune their auto-suggestion features.

The third-party Google keyboard for iOS will likely include:

The overall number of searches on mobile overtook desktop in 2015, and is still increasing. The Verge writes that “there’s evidence that mobile search is proving much less lucrative for Google than the desktop.”

Mobile search queries are not as strong as they could be. This is partly because there will likely never be a need for most mobile users to search for common terms like “Gmail,” “Twitter” or “weather” because there are integrated mobile apps for those purposes. Google search results are some the most expensive and profitable ad spaces on their network, and display ads for terms like those mentioned earlier are some of the best to buy space for. Google is losing out on significant potential mobile advertising spots, and is attempting to increase the number of mobile searches by offering a search-ready, third-party keyboard.

Voice-searches on Siri have taken a share out of Google’s mobile searches too. In fact, Siri even suggests apps that could have otherwise been Googled.  Even Google CEO Eric Schmidt has called digital assistants like Siri a serious threat to his company’s core business.

While the Safari mobile app’s default search engine is Google, Siri’s default is their rival, Bing. In fact, Siri will only search Google if you specifically tell it to Google something. Siri will also use other services likes Wolfram Alpha and Wikipedia in answering users’ questions, and the defaults, as well as those services, create a diversity of resources that are cutting into Google’s share of the search space.

The new keyboard seeks to curb how competition affects its search volume by blending into its native environment and directing users back to Google. It will likely make use of a branded button to directly route users to a Google search.

The possibilities for Google to use their keyboard to gather data and improve their services are almost endless. Their keyboard can even allow them to skim data on what users are searching for.

The autosuggest and autocomplete features will provide Google with more information on how people are searching on their mobile devices. With iOS integration, Google will be able to compare the search patterns and behavior of user bases on various devices and fine-tune their suggestions and search experience to best accommodate their full audience.

How successful could this be?

The keyboard is not yet available, so we have yet to see how it will be accepted by the iOS community. Third party keyboards have historically had a hard time getting traction on iOS, and can sometimes cause significant performance issues.

Up until the release of iOS 8 in late 2014, Apple kept a strict native-keyboard-only policy, and its users liked it that way. Many iOS enthusiasts appreciate that Apple has traditionally been closed-source, meaning their services are more unified and simple, but less customizable. Android, iOS’s competitor, might be met with an underwhelming response from Apple devotees.

Google’s mission to keep their search volume from shrinking is one that they take extremely serious. Google Search is their core business. When the keyboard released to the public, we can expect it to offer convenience and streamlining that can go a step further than what Apple’s closed-source native keyboard is capable of delivering.

For more information about recent developments with mobile search, take a look at our recent blogs here: