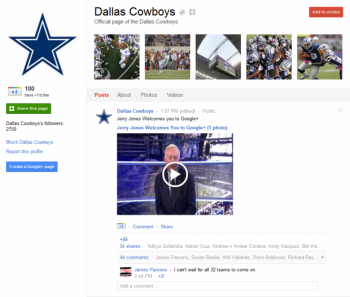 Google announced the availability of Google+ Pages on Monday morning, opening the platform for enterprise use. This much anticipated development is currently rolling out and paves the way for businesses to share content with the platform’s growing number of users – and it seems Google+ Pages could also impact SEO marketing efforts.

Since Google+ launched, businesses have waited for the chance to leverage it for social media marketing campaigns. According to Google, Pages will allow businesses to connect directly with prospects and customers.

People (and user experiences) are still the primary focus of its brand pages, Google said. The highly customizable element of Google+ will allow users to add businesses to specific Circles, and the same is true for businesses. Local businesses appear to be the ultimate benefactor of Google+ Pages.

All companies can use the platform to interact with their customers as they do with other platforms (and segment them into Circles, which they can’t do on other platforms), but small businesses trying to foster relationships with new audiences might especially benefit from sorting users into Circles for engagement. Whether that happens with a post designed for a specific Circle or a Hangout used to speak directly with a group of customers, the new opportunities presented to companies will grow substantially.

In its blog post, Google highlighted Zen Bikes, a small bicycle shop in Manhattan. The shop’s owner John Keoshgerian was featured in a video on Google’s blog spost, which details the ways he’s used Google+ to reach his customers and work with them one-on-one. Among the largest benefits of social media marketing for small and local companies is the ability to translate the personal, custom feel of a nearby shop online – a feature that often makes consumers choose neighborhood stores, but one that is generally lost on the world wide web. Brafton reported last week that improving engagement is the No.1 goal for businesses using social media. The Hangout is the most interactive tool offered by a social media platform to date, and leveraging it to improve engagement could be a boon for small businesses.

With the roll out, Google announced that some widely known brands, including Barcelona FC, Fox News, the Dallas Cowboys and Toyota already have active Pages on Google+. It appears that the service is not open to everyone at the moment, though, as the company works out the inevitable bugs. No timetable has been announced for complete availability.

Beyond Pages, Google has made it easier for Google+ users to find the Pages of their favorite brands with an adjustment to search. Brafton reported last month that Google had removed the “+” functionality, which allowed users to limit their results to those containing the exact terms they searched for. Now, Google explains that adding “+” before a company’s name into Google search will take the user directly to the brand’s Page. Dubbed Direct Connect, the feature will also allow users to add the brands they search for to their Circles. In its blog post, Google says that Direct Connect is only available with Google, Pepsi and Toyota at the moment, but the feature will be gradually integrated with other companies’ Pages.

The +1 feature is also be available for Pages, so users can recommend their favorite companies to people in their Circles on Google+ with a single click. As such, SEO marketers should plan to link their Google+ Pages to their sites (and site content to their Google+ Pages) as insiders have long said that +1’s may factor into search rankings.

While Google+ has struggled to maintain consistent traffic levels, CEO Larry Page said during his quarterly earnings calls that the platform has surpassed 40 million users, Brafton reported. With the addition of Pages, as well as integration for Google Apps subscribers, Google will likely be more aggressive in encouraging users to share content through the multiple streams it has opened in the last month.