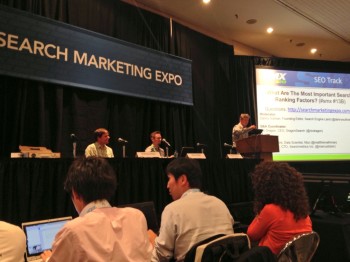 If you’re following the algorithms, SEO is a moving target: Google proves it’s constantly refining the way it serves results to users. It’s clear from new algorithms (like last week’s Hummingbird) plus other curveballs (rise of keyword (not provided), anyone?) that the search giant expects marketers be equally vigilant with their digital strategies to stay on top of SERPs. At SMX East, two data scientists tried to unlock the mystery of ranking factors to streamline SEO efforts or priorities.

First up, Moz Data Scientist Matthew Peters provided an in-depth look at the latest Moz Rankings Factors Report, surveying more than 120 respondents on 80+ ranking factors and analyzing 14,000+ keyword results. Then Marcus Tober, CTO of Searchmetrics, offered his company’s data around organic results on the top 3 SERPs for more than 10,000 keywords.

Finding the factors that matter for ranking Peters pointed out that there are four clues to what drives ranking – and some of the clues are not accessible to marketers. At play:

While Peters feels stats are the surest signals of ranking factors, he pointed out that it’s rare that the numbers can surely identify correlation and causation (as he feels they do with links), but correlation can often give more hints at causation. For instance, the study found longer pages tend to rank higher and they tend to get more links. Perhaps they rank higher because they get more links (not because they are longer). Both studies found links are highly valuable. In spite of what Matt Cutt says about marketers’ common SEO mistakes commonly revolving around link building, Peters called links the most correlating fator in the study). The authority of links is key, with diversity and volume factoring into rankings.

When asked, how valuable is internal linking?

Which are more important internal or external links?

Toby also pointed out that he found more “No-follow” links on Page 1 results than in previous studies. Notably, Google has been advising on more instances where sites should use no-follow links.

Peters shared data about the number of fresh brand mentions a domain receives correlating with its ranking. He pointed out that these “mentions” were often presented in the form of references (but not links). This seems to support Toby’s data on more “no-follow” links around Page 1 results – even uncredited citations correlate with search presene.

Peters found the anchor text  – partial and exact match – was also highly correlated to ranking. Even in the face of the Penguin roll out. Though he offered a disclaimer: Navigational queries (not “corrected for” in the study) tend to have a natural use of exact match anchor text (like linking to Facebook on the word Facebook). This could be why exact match performed so well.

Toby pointed out that his data shows a waning influence of anchor text over time in the face of Penguin, especially from 2012 to 2013. He went into detail of showing how algorithms seem to impact the importance of different variables over time, and suggested exact match anchor text is dying out because of Penguin. “Your site has to lose a lot of weight in bad, spam links with exact match if you want to rank in search,” he said.

Site speed – no impact on rankings?

Peters did not find a significant correlation between site speed and rankings, but he was quick to point out :

*Why the comeback? His new data suggests removing the low quality exact domains left the strongest EMDs to dominate. Social – counts, but how much?

Peters study has already sparked controversy in the search (and marketing) community: Moz data suggests +1’s have a statistically positive correlation with rankings. And he suggests this could be a correlation hinting at a harder-to-identify cause beyond the +1’s.

“I know +1’s influence result positions: I can verify this with my eyes.” – Danny Sullivan

Toby also confirmed that +1’s “definitely” have the highest correlation of social signals in ranking according to Searchmetrics data. (And Facebook data had a high correlation for Bing rankings.) He put it well when he compared SEO success to the TV show – The X Factor. There are the judges (ie: Bing or Google algorithms – perhaps even Larry Page, himself, and then there are the fans. The judges are the gateway, but the ultimate reach and success of X Factor contestants is tied to their ability to connect with the fans (searchers, social followers and general web users in the SEO world). Even in a “de-personalized” sense, if a result is clicked more and ranks higher because of click votes, it’s hard to get aggregate data about the clicks a result gets.

While the data scientists tried to qualify their responses, Danny Sullivan said, “I know +1’s influence result positions: I can verify this with my eyes.” He was referring to “logged in” searches – which the tests tried to control against. Overall, Sullivan’s conclusions raised the collective question: Why focus on ranking factors when no two searchers will see the same results?

Do “de-personalized” ranking factors matter in a personalized search world?

Search doesn’t happen in a vacuum.

Session moderator and SearchEngineLand founder Danny Sullivan pointed out that statistically correcting for social data or local results creates a SERP experience that would be hard to replicate in the real world. More, from a previous SMX conference, Google’s Jack Menzel said search doesn’t happen in a vacuum, when explaining personalization at play on SERPs.

At the same time, Sullivan and the data scientists agreed that it’s useful to consider the weight of on-page, or link-related ranking factors as well as the potential “de-personalized” impact of different social activity as a starting point. As Matt Cutts has said, links aren’t going away anytime soon… but the predictions about future search ranking factors hint some marketers might they they’re value is diminishing.

Peters pointed out that survey respondents believe non-traditional ranking factors are expected to decrease in ranking value. Even while the data shows EMD, anchor text, etc continue to have statistical correlation, the marketers themselves predict these elements lose rank influence over time.

The panelists agree that value, quality, authority of website content will be more important moving forward. Tober pointed out, “Everyone thinks they have great content, but clearly not everyone can have great content. Let the social signals – the user signals – be the guide.”

Danny Sullivan also raised the discussion that sites can’t be providers of facts, they have to be providers of insights. Even if coering publiclty available information, his comment raised the need for creative angles and editorial strategies that help position the information in a more useful way. If you have a celebrity birthday site, you can’t just list when a birthday falls. Try to get at something a little harder to find, so your site offers something exclusive– ie: What did they did the celebrity get for his birthday, or what did other celebrities say to him through social media on his birthday?

Matthew Peters also advised brands start with good content, and then connect with the community in their fields. (Read more in Brafton’s related SMX coverage of link building tips.)

“If there’s a significant amount of traffic on a well-designed mobile site and people are having good experiences and using it, then it makes sense that it will rank well for mobile.” – Matthew Peters

Mobile sites with responsive design seem to do better for mobile search, says Marcus Tober, but Peters has no conclusive research on this point.

As Peters said, if there’s a significant amount of traffic on a well-designed mobile site and people are having good experiences and using it, then it makes sense that it will rank well for mobile. At an earlier conference this month, Matt Cutts hinted that mobile optimization could be more important over time.

For more, check out Cutts’ insights on mobile and Google as an “editor” of good content on the web.