These stuffed toys inspired perhaps the quintessential collector fad of the 1990, giving Gen-X and millennial consumers their own little taste of Tulip Mania. All the enormous hype and eye-popping price tags got a big boost from a then-innovative source: one of the first real blogs, maintained by parent company Ty, on which different Beanie Babies would “post” their ghostwritten updates to an online diary.

The Ty blog entries showcased the early potential of influencer marketing, the practice of building brand awareness, cultivating an audience and shaping purchase decisions via the power of well-known and persuasive personalities. In that case, it entailed personas modeled on highly sought-after toys, meant to drive word-of-mouth about their appeal in lieu of conventional ad buys. Today, “influencer marketing” as a term is nearly synonymous with the recommendations of peers and online content creators, as well as celebrity endorsements.

Everything from an in-depth product review to a quick how-to video has a natural home on YouTube, making the platform an especially versatile channel through which influencer marketers can reach and affect their audiences. And those audiences are huge.

The above number, taken from a Google-sponsored study, indicates that literally 1 billion+ plus individuals place YouTube stars among the foremost trendsetters and tastemakers. Popular channels like those of fashion reviewer Grace Helbig and podcaster Joe Rogan have millions of subscribers apiece.

More importantly, their followers are highly engaged and likely to act on what they hear. Six in 10 YouTubers would give more weight to a content creator’s advice on what to buy than they would a traditional celebrity endorsement.

A successful influencer marketing campaign on YouTube could take the form of a hands-on demo, careful product placement or daily vlogging. There are so many ways to build and monetize an audience on YouTube for marketing efforts within your particular niche, whether that’s beauty product recommendations or power tool guides.

2. Instagram topped 1 billion active users in 2018 – and most of them are millennials and Gen-Z

87 percent of influencers cited Instagram as their favorite platform in 2018.

Its distinctive aesthetics and user demographics, which skew younger than the general population, also made it an ideal platform for posting the aspirational content so conducive to building brand awareness and loyalty. You don’t have to take our word for it, though – 87 percent of influencers cited Instagram as their favorite platform in 2018.

Between 2016 and 2017, the number of Instagram posts bearing the FTC-required #ad or #sponsored hashtags for sponsored content surged to 1.5 million. These updates generated over 1 billion likes between them that year. But those numbers don’t tell the whole story, as influencer marketing efforts on Instagram are often subtle and organic.

Almost two-thirds of the top-performing Instagram posts feature products and find their audiences through carefully selected hashtags, filters and additional details such as geotags and video captions (these are very important, and a lot of people don’t even know they exist!). The Instagram users who engage with influencer posts are relatively young millennial consumers; over 60 percent of them under 35. That puts them squarely in the lucrative 18-34 segment that many marketers target.

Bottom line: Almost any modern influencer marketing campaign will be #blessed to have a strong presence on Instagram. As much as three-fourths of purchasing decisions by Instagram users are influenced by what they see on the platform.

3. Nine in ten Pinterest users use their pins to plan purchase decisions

Other than Instagram, no platform is so closely associated with influencer marketing as Pinterest, the image-centric social network that launched in 2010. Pinterest’s pinboard-inspired design lets users assemble collections of pictures, GIFs, videos and other items, many of which serve as blueprints for future purchases.

If services like Pocket and Instapaper offer the web’s version of a “Read It Later” button, Pinterest is a close as it gets to a “Buy It Later (Probably)” button. Ninety percent of Pinterest users saying they use it to make purchasing decisions and 60 percent buy something from a brand after seeing a promoted pin.

To influencer marketers, Pinterest offers a great balance of branded content opportunities and organic reach. To Pinners, the site is a much more trusted source of product recommendations and exposure than search engines, other social media or even friends and family.

Pinterest offers greater flexibility than the other major influencer marketing platforms. A Pinterest campaign might entail curating a special board that mixes products from top brands, using promoted pins or participating in the official Pin Collective program, which pairs businesses with content creators who are experts in producing beautiful, high-engagement pins.

The long half-life of Pinterest pins also allows for highly protracted marketing efforts. The typical pin takes 3.5 months to generate half of its engagement, compared to 90 minutes for a Facebook update and only 24 minutes for a tweet.

A Netflix executive once identified the hit game “Fortnite” as a bigger competitor than Hulu or HBO. The fast-growing livestreaming industry offers a clue as to why: On top of actual playing time, consumers collectively watch billions of minutes of lengthy live playthroughs of “Fortnite” and other games, along with non-gaming content. Influencer marketers are capitalizing on the platform’s notably high levels of engagement.

Users who spend only a few seconds engaging with marketing content on Instagram or Facebook might spend minutes with it on Twitch, since they are giving the live video their full attention. There are plenty of effective ways to reach an audience on Twitch via an influencer campaign, including:

While it’s not as well-known an influencer marketing platform as Instagram, Pinterest or YouTube, Twitch is an up-and-comer with undeniable potential. Partnering with an influential content creator on a live stream is a relatively low-cost way for a brand to incorporate video into its marketing efforts and increase its chances of sustained engagement.

Don’t mistake Twitch for a gaming-only platform, although that does remain its most prominent vertical. The platform has dedicated categories for hobbies and crafts, food and drink, art, science and technology, special events and more. With more than 9 million channels up and running, there’s endless variety across Twitch and plenty of room for you to reach the right audience.

No discussion of today’s social media-powered influencer marketing would be complete without a few words about the Social Network itself and its more than 2 billion members. Facebook’s sheer size makes it an important forum for influencers, despite it lacking the curatorial design of Pinterest, the cultivated aesthetic of Instagram or the video-only format of YouTube and Twitch.

The stat above shows just how wide Facebook’s reach is across digital life. It’s a local and national news site as much as it is a place to like vacation photos or reply to questions in someone’s status update. The massive number of eyeballs focused on Facebook means that reaching even a small sliver of its active users can generate considerable return on investment (ROI). Marketers as a whole see Facebook as the best social network for ROI on ad spend. What about influencer marketers in particular?

Facebook has gradually made it easier for influencers to team up with organizations looking to reach certain audiences. Dedicated tools such as the Brand Collabs Manager simplify the process by which brands can find, contact and collaborate with content creators whose audiences overlap with their own.

Even without using these specialized services, influencers can get plenty of mileage from Facebook by reposting and sharing assets originally posted elsewhere, such as a video or infographic. Influencer content on Facebook has a higher click-through rate than ads, although its cost per click is also higher.

Twitter has likened influencer marketing to the digital equivalent of a Wheaties box. That cereal brand became notable for the athlete portraits that appeared on many of its boxes and indicated the star’s endorsement. The fast-paced, conversational nature of Twitter makes it a powerful engine for generating word-of-mouth via comparably high-profile endorsements, albeit ones that can attract thousands of likes and retweets within a matter of minutes. 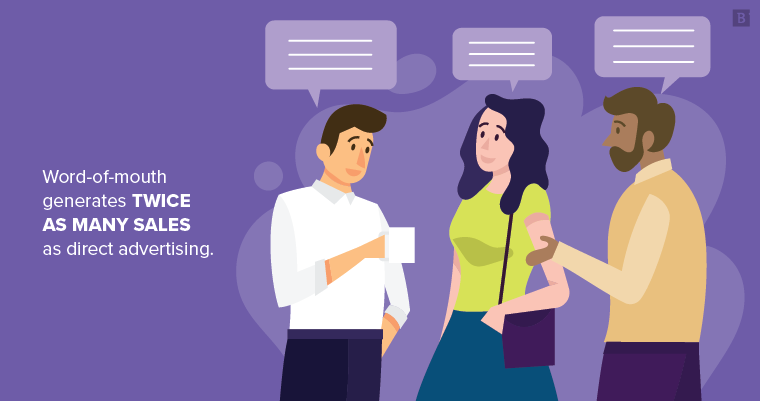 Twitter users who see tweets from brands experience a 2.7-fold jump in purchase intent. Add influencer tweets to the mix, though, and the boost nearly doubles, to a 5.2x increase. In fact, Twitter’s researchers discovered only a narrow gap between the share of users who sought out recommendations from influencers (49 percent) and those who did the same from friends and family (56 percent).

On Twitter, as on the other platforms we’ve looked at, the best approach to building brand awareness and converting users is usually to combine influencer and branded content. That way, you can reach an audience at different parts of the sales funnel while presenting them with varied content, from video testimonials to tweets optimized and tagged to gain traffic from current events and holidays,

7. Word-of-mouth generates twice as many sales as direct advertising

An effective YouTube explainer video or a strategically placed pin can generate the consumer-to-consumer recommendations that often provide much greater ROI than simply buying an ad. According to McKinsey, recommendations of the iPhone during its first 2 years of availability in Germany drove six times as many sales of the devices as Apple’s own paid advertising.

Very little if anything in the marketing world compares to a direct recommendation from a trusted source. Whereas display ads often lose out to ad blockers and video spots are either ignored or skipped, word-of-mouth suggestions reliably hit home. Friends and family are high on the list, and so are content creators with large and attentive audiences, as Twitter found in its research on how the platform shaped buying decisions.

8. Brands average a $6.50 return for every $1 of influencer marketing spend

At the end of the day, influencer marketing efforts must do more than build an audience. They must also show tangible ROI and prove that they’re worth investing in, even at the expense of possibly bypassing more traditional routes such as direct advertising.

Evaluating an influencer marketing campaign is complex, with many possible KPIs to look at, including:

Inevitably, results from influencer marketing vary widely by company and platform. They’re generally positive, however – 70 percent of respondents to an Influencer Marketing Hub survey reported an ROI of $2 or more and the average ROI was $6.50 per dollar. Some companies saw as much as a 20-to-1 return!

In 2019 and beyond, influencer marketing is a critical area to focus on, alongside other similarly proven practices like SEO and email marketing. While the days of using a humble online diary to generate a huge bubble in the prices of stuffed toys – and an ensuing cultural phenomenon – are long gone, you have a more sustainable opportunity in front of you: The chance to cultivate audience trust and admiration, all at the massive scale of the web. 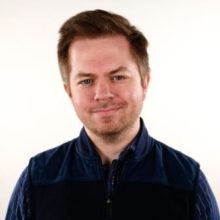 The vast majority of content published on the web sees close to zero engagement. Here are the best tips and tricks for distributing your content effectively.

Here are five tips you can implement right away to take your Instagram game to the next level.