Jeff Keleher is the type of person you’d describe as “sagacious” without even knowing that word existed in your vocabulary.

It’s not that you’ll find him buried in a book, pushing glasses up the bridge of his nose before clearing his throat and saying, “Actually,” index finger rising skyward in exclamation. No, it’s more that his calm, collected demeanor, along with the slight smile that often plays at the corners of his mouth, seems to hint at a reservoir of deep knowledge.

He exudes a presence that says, “Life’s a garden, man – dig it.”

Of course, he would be the first person to disabuse you of this notion. Call it Midwestern modesty.

That said, there’s no denying Jeff’s contribution to Brafton’s past, present, and, if we’re lucky, future. 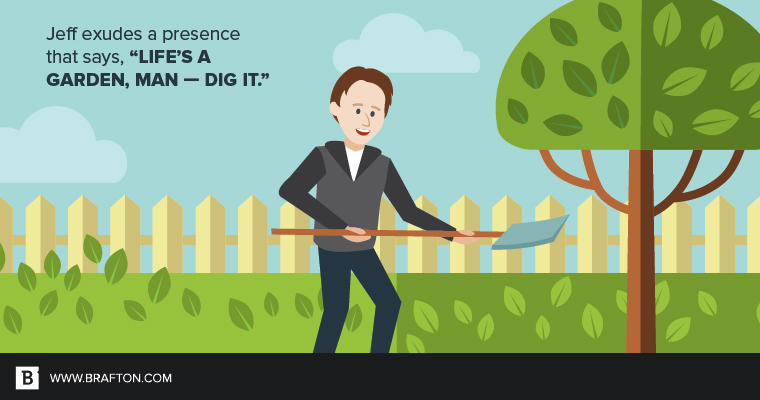 Born in Evanston, Illinois, Jeff called nearby Barrington home from the time he was six months old. However, he probably would’ve been happier in a sewer under New York City.

“When I was 6 I wanted to be a ninja turtle, but I got laughed out of that one by my mom,” Jeff recalled, a flicker of teenage mutant regret in his eyes. “ I always wrote. I don’t know if I considered becoming a writer viable, but I wrote. Odds and ends.”

He may have held a soft spot for the written word, but he attended the University of Illinois at Urbana–Champaign looking to join the ranks of Freud and Jung. Alas, psychology wouldn’t be his mistress for long.

“That lasted a year and a half,” he said. “I was still going to classes, but not paying attention. I’d be writing stuff, short stories and things. I had to take a required writing class, and the professor asked if I’d ever major in creative writing. Getting some external validation made it seem more real, and by that time I didn’t really care for psychology anymore.”

And with that he switched majors, earning a bachelor’s degree in creative writing just in time for all the hot writing jobs brought on by the Great Recession.

“After college I bummed around doing temp jobs,” Jeff said. “I managed a UPS store at one point, but was trying to freelance to varying degrees of success, often unpaid, just to get clips. I did an internship at a luxury lifestyle magazine. The internship ended and I started mass-emailing people. I don’t remember sending in an application for Brafton. One day I got an email asking me to come in for an interview. I was just pumped at the idea of getting paid to write for a living.”

Welcome to the jungle

Jeff started out on the Chicago technology editorial desk under one Mr. Matthew Kaplan. After six months as a Content Writer, he was bumped to Senior Writer. After another six months, he made Assistant Editor. And after the editorial teams merged last year, Jeff found himself the Senior Editor of Chicago’s entire editorial department.

However, after years of toiling away in middle management, Jeff was jonesing to write again in some capacity. That’s how Chicago’s Senior Editor, a man who started at Brafton during the web’s Wild West approach to content marketing, got back in the scribe saddle. Of course, it took a little getting used to, as Brafton’s editorial offerings had evolved along with search engines’ focus on value, relevance and searcher intent.

“The most difficult part was getting used to adhering to the quality of our responsive editorial product,” Jeff said. “And not even the writing aspect of it, but working in all the strategic elements. Mapping out each article, using keyword research from Searchmetrics and trending topics from BuzzSumo – it’s so much more than it used to be.”

Jeff believes content marketing will only get more strategic from here.

“Writers will have to get even more involved in metrics, become more campaign focused, and make sure every single piece of content they create is in line with a broader creative vision,” he said. “It’s not about creating content for the sake of content anymore, but having every single piece serve a specific function.”

“I can stumble my way through some Guns N’ Roses if need be.”

Beyond content, has Jeff retained his passion for creative writing?

“I find time to write for myself every now and then, if I’m feeling inspired or up to it,” he said.

But putting pen to paper is far from his only creative outlet.

“I play guitar,” he continued. “Not super well, but I can stumble my way through some Guns N’ Roses if need be.”

Slash impressions aside, what advice would he give other aspiring content marketing writers? After all, he’s a man who’s been there and back again.

“I think you have to really immerse yourself in a client’s specific industry and business,” he said. “You have to know who they are, who their target audience is, what makes them stand out, and what different marketing methodologies align with their messaging and value proposition. You have to stay apprised of the way the market and industries are changing, and where creative visions need to shift to match that.”

A silence fell. I thought the interview was over. Then Jeff chimed back in.

“I have to amend an earlier statement,” he said. “I also wanted to be a video game designer as a kid.”