There are a handful of people at Brafton who have shown they’re willing and capable to do anything and everything. Patrycja Podrazik is the OG of this group. She’s been with Brafton since the beginning, and her hands have touched almost every department. From writing to research to graphics to video, Patrycja Podrazik’s seen it all.

Born in Poland, Patrycja’s journey to content marketing wasn’t one you might expect. Most people at Brafton have some sort of creative background, having studied English, communications, graphic design, video or journalism in school. Patrycja, however, majored in European Studies.

Still, a wordsmith at heart, Patrycja made her way to Brafton as a writer.

“It was a long time ago,” she said of her start date. “Dinosaurs were still roaming the Earth.” 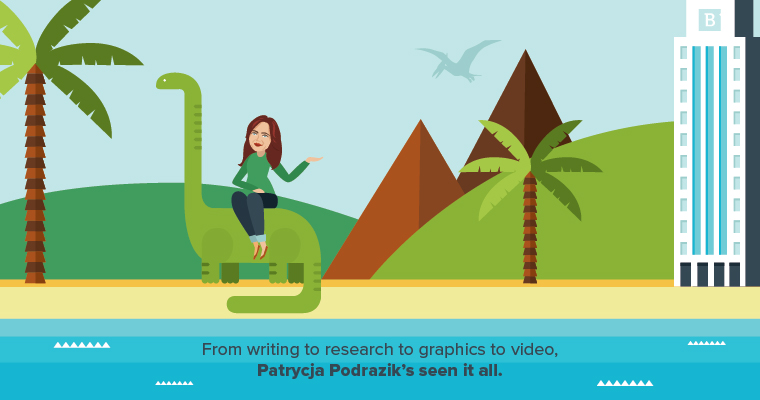 Sharing a cramped office in Post Office Square with an Anchisaurus, Patrycja’s first days at Brafton were a maelstrom of intensity and growth. In fact, the business was gaining new business and new staff so quickly that it had to move soon after Patrycja’s start date.

“Within a few months, we moved to a larger office opposite South Station,” she recalled. “We had Dunkin Donuts on the ground floor and front seats to regular street fights outside.”

I want to assume these fighting locals were actually Aetosauruses, but only Patrycja knows the truth. Still, how awesome would it be to look out your window in the middle of a workday and see two Aetosauruses duking it out?

Of course, daily dino battles didn’t distract Patrycja from her true calling: being everything we at Brafton needed.

“It was a long and winding road,” she said of her path to her current position. “I think I did everything except for sales and finance; maybe that’s still ahead?”

To tally it all up, Patrycja’s resume includes time as a:

Now, she’s Associate Director of Production for the video department.

As you can expect, the title of Associate Director means Patrycja has a lot of responsibilities. In fact, it’s safe to say our video department wouldn’t be nearly as strong as it is without her.

But what, exactly, does her job entail?

“I maintain production spreadsheets for the team: the video, animation and video blog side of the Brafton production database,” Patrycja explained. “I also process financial and production emails to create or archive records as necessary.”

“I help Perry ensure that new projects are queued,” she said. “I also monitor animation queues, and I will also be a backup video producer going forward.”

Clearly, Patrycja’s got a lot on her plate, but her tenure at Brafton proves she’s up to the task.

The daily life of an Associate Director of Production

That middle period is when she catches up on outstanding tasks, mostly financial and production emails, and reviews records to make sure they’re accurate and up to date.

Though video’s potential as a content marketing tool isn’t news, some people are still skeptical. But as Patrycja has seen, video has a very important role in the marketing landscape. Video is a quick, engaging way of transmitting information, providing a cross-channel experience that captures audience members short on time.

“People are visual creatures, and they have less and less time to read,” she said.

In fact, video has evolved by leaps and bounds since its use in marketing. Patrycja’s seen this evolution firsthand.

“We’re doing more on-location shoots, longer work, instead of just shooting product demos in the studio,” she noted. “Our video and animation offerings have turned into a really sophisticated product compared to the early days.”

As for the future, Patrycja predicts that, while videos on social platforms will grow shorter, more brands will see value in longer format videography projects.

Of course, this means that video’s demands are stronger than ever. After all, if you’re going to go through the lengthy process of setting up a shoot, you want to see some return on your investment.

Yet as we’ve discussed in previous articles, video satisfies a customer need you may not even be aware of. Lacking video convinces your audience to turn elsewhere and puts you behind your competitors.

If Patrycja and the rest of the OG Brafton crew understands the importance of video, it’s safe to say that this kind of content should definitely be a part of your strategy.

Here’s a look at what Ryan Pecinka brings to Brafton’s social media department.