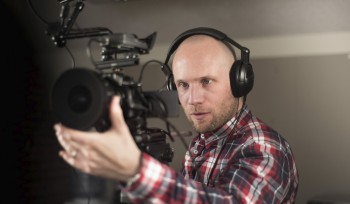 Meet Perry Leenhouts, Brafton’s director of video product. Perry is humble about his pre-marketing career, but those who work closely with him know he was the lead singer in a cult-favorite Dutch band, touring internationally across his native Europe as well as North America.

Perry’s an optimal mix of marketer and artist, packaged in a firm and friendly director who’s always after the intended impact of a video. He was part of a team that (very) successfully managed his band, proving he has the drive for results that any business person will respect. At the same time, his Hollywood-esque background uniquely positions him as an arbiter of entertaining video. He’s got some strong ideas on what makes an effective marketing clip.

The road from MTV to marketing videos

During his 10-year, successful career in the music industry, Perry had the opportunity to appear as a guest co-host on an MTV program in Amsterdam.Being in front of the camera “wasn’t really his thing,” but the experience paved the way for his, and ultimately Brafton’s, future.

“I was fascinated by the crew, how much went into it and the whole studio operation,” Perry said. “Afterward, I went back to music production – but when I started editing music videos for myself, I thought, I could really see myself doing this professionally.”

Perry pursued a production career with a move to the United States and a degree in telecommunications and film from the University of West Florida. Following graduation, Perry landed a job with a Florida television station – a career move he said was pivotal to learning the ropes of production.

“I learned the whole scope of television and video production, from studio directing, on location, live direction, all the way to motion graphics,” he said. “It was a good preparation for what I’m doing now.”

The branded message: Why video marketing is the new Hollywood

Corporate promotional video lovers of past decades may want to turn away for this part: Perry said they were boring (for the most part).

“We have skilled, creative people who choose to work in content marketing. Working in this sector is a great career move, so it makes us lucky, because we’ve attracted very creative people.”

But don’t worry – the times have changed. Since brands realize that video is an essential piece of their content strategy, the creative visionaries have been able to rise to success and knock out the once-boring videos that dominated websites of the early 2000s. Perry said video marketers understand there is a large, global audience watching branded videos, and talented videographers are flocking to the marketing industry instead of their traditional avenues – like Hollywood.

“Corporate videos are (hopefully) not being done by the glorified wedding videographer who does a promo for his uncle’s construction company anymore,” he said. “We have skilled, creative people who choose to work in content marketing. Working in this sector is a great career move, so it makes us lucky, because we’ve attracted very creative people.”

But how does a brand video go from boring to memorable? Here are Perry’s tips and examples of videos our team has produced:

Tell a story that resonates with the viewer

Make a video that breathes personality – a viewer should be able to know what brand created the video – before they see a logo.

Perry’s attributes his team’s success and the success of clients’ videos on a healthy mix of incredible work ethic and determination, though it all starts with creativity.

“We’re willing to go the extra mile because we’re proud of our work.”

“When we bring on a new producer, you can tell his or her potential from the start,” Perry said. “Maybe the skillset is not where you want it to be just yet, but you can tell if the creativity is there. Skills you can teach and skills you can learn – but it’s hard to be taught how to have a creative eye.”

Alongside the creativity, comes the opportunity to make impact and be part of a client’s strategy and success – a feeling that Perry said is a great motivator.

“My team is skillful and invested,” he said. “They don’t come in, animate for eight hours and go home, or go on a shoot and quickly leave. We’re willing to go the extra mile because we’re proud of our work. It’s the details that differentiate something good from something great, the difference between amateur and professional.”

Interested in learning more about video marketing and our video team? Check out these related posts:

7 Common video mistakes and how to avoid them [eBook]
Why marketing video messages need a different lens [BLOG]
Inside the minds of our video team, told through GIFs [BLOG]