Ninety-nine percent – that’s the number of marketers who will continue to rely on video as a cornerstone of their content marketing efforts in 2017.

Wondering why? The answer lies in ROI.

Data shows that among Americans:

“Video is popular because it’s easy to digest,” said Perry Leenhouts, Senior Creative Director at Brafton. “It’s almost a passive form of absorbing information. You just look and listen. You don’t have to read or go to great lengths to find the information you want.” 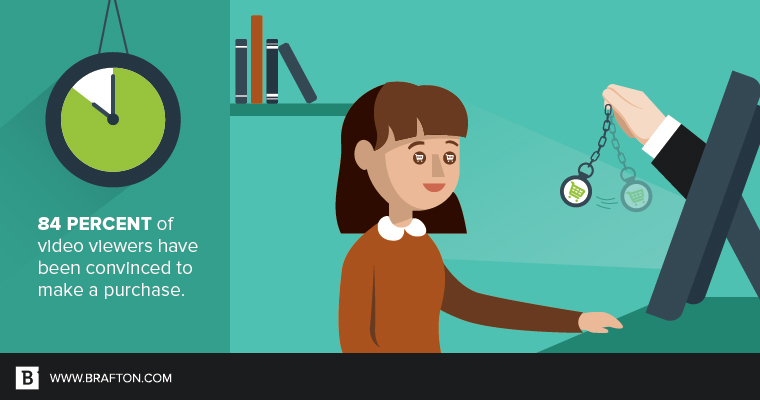 Of course, convenience can only take you so far. Ultimately, video is effective because human beings are hardwired to respond to it.

“It’s a very powerful medium,” Perry continued. “You’re not just dealing with words or a graphic; it’s moving images with voice and music, and these are elements that are not only very appealing but also speak to people’s emotions.”

That said, some businesses are wary of the investment necessary to do video marketing right.

There’s no doubt effective video marketing costs money – not just for production of the content, but also for promotion.

“A video needs a promotional strategy and a targeted audience to provide high ROI,” Perry said. “If you want to get the most out of your video, promote the hell out of it.”

However, newer and cheaper technologies mean older pricing models no longer apply. It’s easier than ever to produce and distribute high-quality video, and with an ever-increasing number of video production companies jumping into the mix, prices have lowered to remain competitive.

Meanwhile, social media offers brands a way to reach huge audiences at a fraction of the price of old-fashioned video advertising.

“If you want to get the most out of your video, promote the hell out of it.”

Advances in technology have also opened the door to numerous types of video marketing, from news-focused video blogs to animated explainer videos.

“If you’re looking for traffic and want to do something low-cost while getting your name out there, vox pops, or man-on-the-street interviews, are a very effective way to engage an audience while keeping costs down,” Perry said. “It’s an easy way to create impactful evergreen content. Then there are video blogs, which are fast, efficient studio productions that allow you to create a high volume of videos at a minimal cost.”

More expensive, time-intensive options include in-depth testimonial videos. Perry pointed out these types of video products can be used for years to come.

“That’s not a piece of content you only use once or for a couple of weeks,” he said. “That is something that can build trust for prospects for a long, long time. It’s a way of introducing and vetting your business in the eyes of a prospect. And you want it to look great, and flow great, and work great. And that takes time and technology investment. The benefits are worth a lot more in the end than the price you pay for production.”

As with any type of content marketing, the best way to maximize ROI is to plan ahead.

“It’s not a matter of spending money on production and having a great looking video,” Perry said. “Having a great looking video means nothing. There are millions of videos released every day, and they’re all your competition. You have to have a plan. What’s the goal? What are you trying to achieve? Who are you trying to reach? How are you going to distribute your video?”

Also remember where videos sit in the sales funnel. While there’s no hard and fast rule regarding how videos should be used in content marketing campaigns, video has been shown to be effective for bottom-of-funnel viewers looking for information before making a final purchase decision.

At the same time, video can be invaluable in terms of generating brand awareness and increasing top-of-funnel website traffic.

Finally, keep consistency in mind. Don’t expect to set the world on fire with a single video.

While viral fame can’t be forced, a slow and steady approach pays off. One Brafton client boasted more than 100 viewer conversions over a single quarter after switching to a more consistent video strategy. Average time on site increased 92 percent among viewers, and unique video pageviews rose by 309 percent.

Numbers don’t lie, and video marketing offers them in spades. For instance, 81 percent of businesses that invested in explainer videos said the strategy helped increase sales.

Before you can analyze video’s effect on your own sales figures, you must show you understand its commercial value and make it part of your content marketing game plan.