To paraphrase a common if crude cliche: Length matters. At least where video is concerned.

The return on investment of video marketing is undeniable. It can inspire your targeted audience to download, subscribe or purchase. However, video content only succeeds if people watch it.

Well, the numbers are in. If your video marketing exceeds the two-minute mark, there’s a good chance it’s falling on deaf ears (or at the very least, glazed-over eyes).

2 minutes is too long

The attention span of a goldfish is nine seconds.

Now, before you start patting yourself on the back for being at the top of the food chain, consider this: A study from Microsoft Corporation discovered the attention span of human beings is eight seconds. Look who’s laughing now. Hint: It’s the goldfish.

To what do we owe our fish-like level of concentration? According to researchers, multi-screeners – people who use computers and smartphones and television sets on a regular basis and often at the same time – are more easily distracted. All that information streaming in from multiple channels represents a level of stimuli they’re unable to properly filter.

With this in mind, it makes perfect sense that short and sweet videos are more effective than long-form video content. Who has time for two minutes when there’s Facebook and Tinder and Netflix to contend with?

Don’t take our word for it. There’s no shortage of data showing length equals death in terms of video lead generation.

While the numbers indicate longer videos are less effective than their shorter counterparts, it’s not a simple matter of condensing all your video marketing. Context matters.

“There are many variables that determine a video’s watchability,” said Jim Davis, Senior Lead Animator at Brafton.

“Where will the video be played, and who is the audience? If a video is being served as an advertisement, it better be short, catchy and entertaining. If a video is on a product-specific page, and the audience is seeking out specific information, it can be longer and less topical (like when you are creating a video from a how-to blog). For more in-depth or technical details, the audience will sit still longer.”

Of course, when you’re trying to make a splash on social media, expecting viewers to sit still goes out the window. 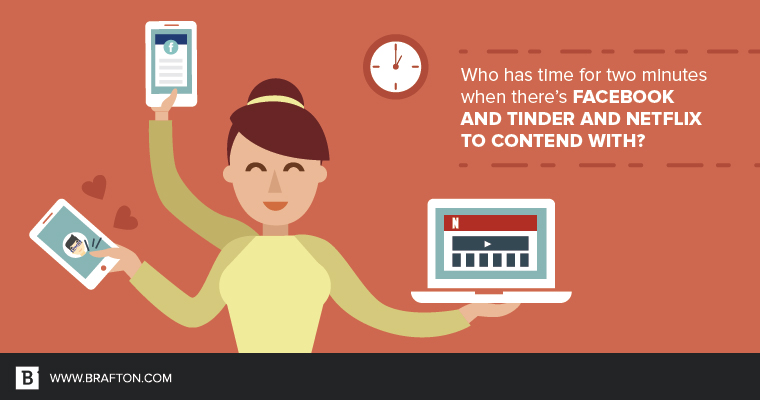 “When scrolling through a social feed, you have a second or so to grab someone’s attention,” Jim continued.

In fact, videos that are 15 seconds or less are shared 37 percent more often that those clocking in between 30 seconds and a minute.

It’s also important to keep in mind the hardware involved.

“Video is primarily viewed on mobile, particularly shorter videos,” Jim said. “If someone is watching a 10-minute video discussing in-depth product features, chances are they’ll be on a desktop.”

Grabbing attention (and holding on)

In order to overcome short attention spans, it’s vital to begin with a bang. Research showed 20 percent of viewers will click away from a video in 10 seconds or less if they’re not impressed. That number increases to a third of viewers at the 30-second mark, 45 percent by a minute in, and nearly 60 percent by two minutes.

In short, make sure the important info is front and center, along with eye-catching visuals and engaging audio (if your audience is even listening, that is).

“Creating great content with an identified audience is the best way to gain recurring viewers,” Jim said. “Releasing one great video per week is better than releasing three mediocre ones. The strongest video marketers have their audience anticipating their next video. These people will come back to their page to check for it.”

The strongest video marketers have their audience anticipating their next video.

Quality comes first, but that doesn’t mean you won’t need to make cuts to accommodate a shorter running time. Forget repeating points or looping back to summarize a concept.

Ending with a call to action is important, as is ensuring pertinent links are close to the video player, be they for other videos, white papers, blog posts or some other lead generation tool. However, your first order of business is always getting someone to click and keep watching.

A short video with low-quality content won’t do you any favors, but even Oscar-winning video marketing will fail if it wastes your target audience’s time.

A simple explanation of a not so simple but incredibly important type of marketing.